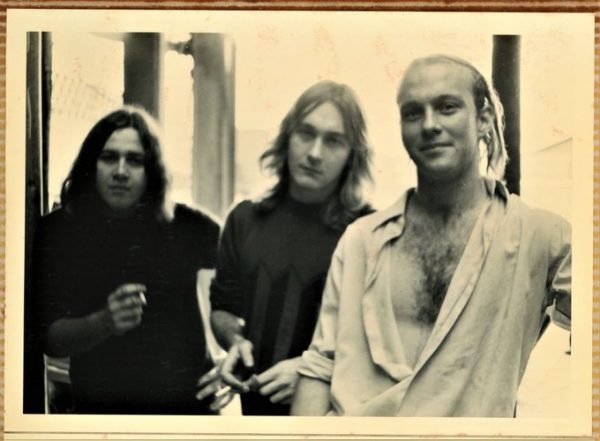 Classic photographs from Rennie Ellis (at the Tiger Room in 1977) to Bailey’s creative partner Ed Kuepper @EdKuepper broke the sad news of Bailey’s passing,  to fans  around the world. 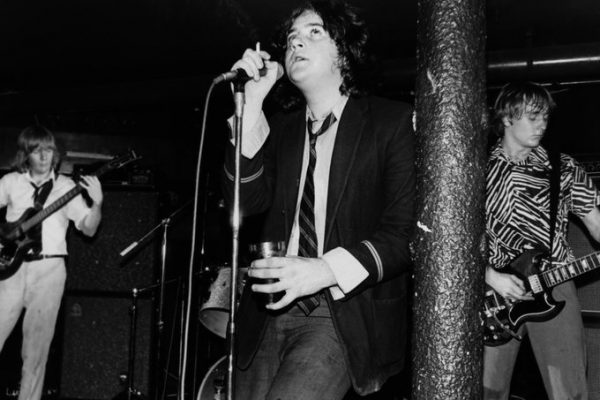 Nick Cave wrote a tribute to Bailey on his website The Red Hand Files and included a famous photograph of himself, as a young musician, in a crowd of Saints fans, by Rennie Ellis (Main Picture). 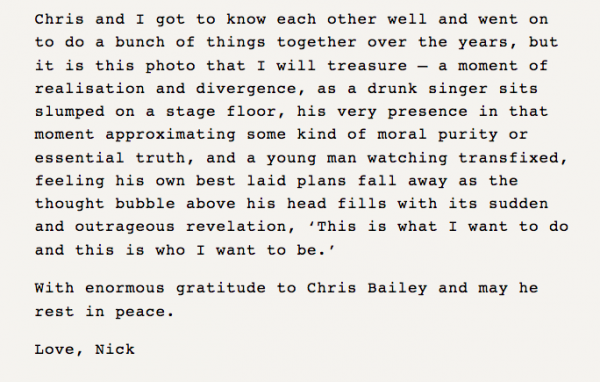 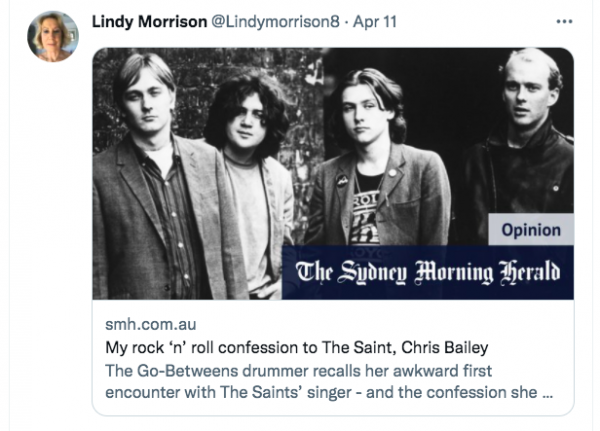 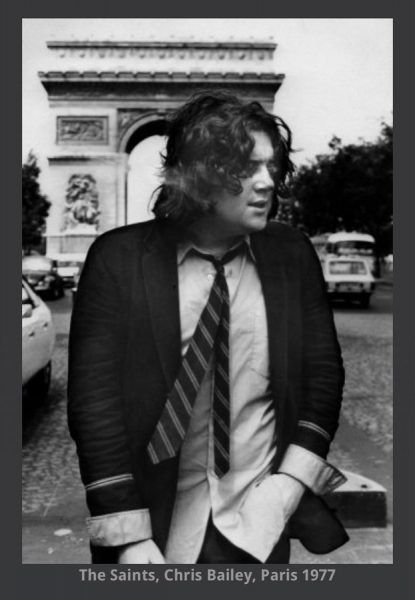 The Tiger Room on 23rd April 1977
Like the Sex Pistols in Manchester, the Saints in Melbourne played a now-famous gig on 23rd April 1977 that influenced a generation of Australian musicians. For more on curated Saints’ history see the excellent From the Archives 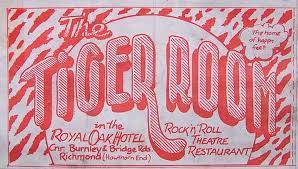 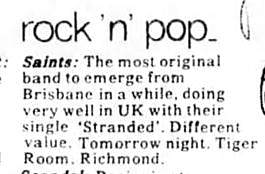 The Best of Chris Bailey

“It was our first adventure in a recording studio.
I recall it all felt rather natural. Drink and go to work”: Chris Bailey, 2001 speaking to MOJO

Speaking to Andrew P. Street at Faster Louder, Chris Bailey said: ” I know that years ago I refused to play [debut single] ’(I’m) Stranded’ because I thought it was the most boring song I’d ever heard – well, that’s not strictly true, it’s actually an OK tune – but people even had t-shirts printed up that said “Play Stranded, You Bastard” [laughs]. But I remember there was one tour and there were all these Hitler Youth looking kids going “play ‘Stranded’! Play ‘Stranded’!” so we did, and nobody noticed.”

Chris Bailey on Triple J, 1985: “With Stranded I was chuffed because it was a record and it had my picture on it. I was young and I didn’t know any better.”

Andrew Stafford, in The Guardian – “Then there was the video, which begins with the unintended metaphor of drummer Ivor Hay kicking open a door. The band are playing in an abandoned building on inner city Petrie Terrace, Bailey singing in front of a fireplace with the words “(I’m) Stranded” daubed above in red letters, which would form the backdrop for the cover of the Saints’ debut album of the same name, released in February 1977.”

Rat Scabies, The Damned: “One of the things that made punk very valid was, when you consider The Saints were doing the same in Australia at the same time and the Ramones in New York, it was obvious that people wanted to do it all over the world. The Saints were totally removed from everything going on anywhere else. They couldn’t get Sounds or NME in Australia. The synchronicity was amazing.”

Robert Forster: “I got the single, released on the band’s Fatal label, the next day and I wish I’d bought twenty and was now slowly selling them on eBay.”

Ed Kuepper (in Dig by David Nichols): “I was working at Astor Records as a storeman and noticed boxes of private pressings – mostly country tunes by truck drivers. Having our own label seemed like the sensible way to get a record out. We conducted a poll among our fans as to which songs would most likely become a hit and ‘Stranded’ got the most votes. I can’t remember if we rigged the poll.’

The Clash and The Saints

Barry Miles: “All the punks bought it. Bernie Rhodes, the manager of The Clash, had a box of them and gave me one just two weeks after release. “ (From London Calling: A Countercultural History of London Since 1945)

Jon Savage: “The Saints had been developing in near-isolation for three years but it took just one review in Sounds to make their career.” And – “I came out of university, and into a recession. I couldn’t see how I could have the life I wanted to have. Anybody that was into rock music in around 1975 had a real sense that something was going to happen. When the first Ramones album came out in 76 I thought, “Whoa, this is it.” I was obsessed with them, and The Saints’ record, I’m Stranded. It’s a great record, the singer just didn’t give a shit.”

Bob Geldof: Rock historian Glenn A. Baker records how Boomtown Rat Bob Geldof told him: “Rock music in the ’70s was changed by three bands—the Sex Pistols, the Ramones and the Saints”.

Clinton Walker: “When Kid Galahad and the Etemals became the Saints back in Brisbane in the mid seventies,there wasn’t even a scene they could crash into. Eventually, with bassist Kym BradShaw in tow, they wound-up playing at parties they would throw themselves.”

Mark Moffatt: “In London, I worked in a guitar shop and people would bring in their amps to sell for cash,” Moffatt recalls. “I could hear this thunderous noise upstairs so I went to see what was making it and bought the amp that afternoon.” Moffatt, a guitarist in the Carol Lloyd Band, had recorded in Sydney, where he picked up tips about microphone placement. There was a cement hallway at the studio, so for The Saints I put a microphone in there. You can hear that in the chorus of No Time where it takes off. I still hear that now and go ‘Wow’.” 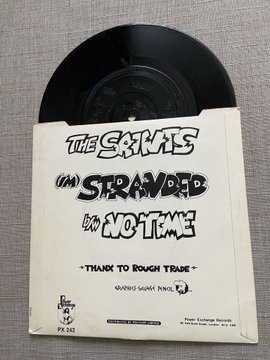 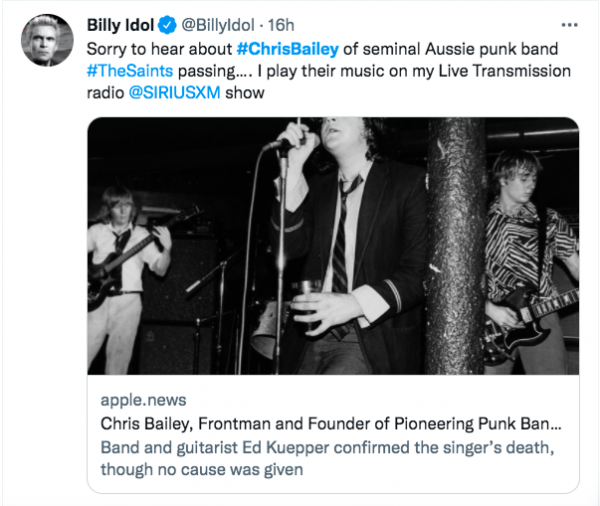 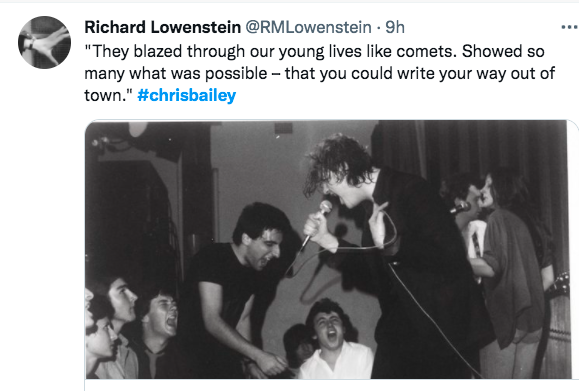 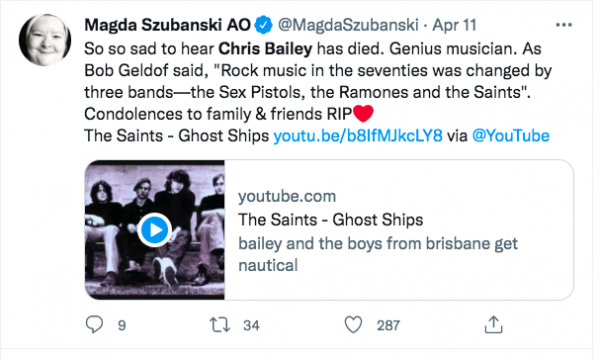