It was always obvious that Steve Kilbey is an extraordinarily complex chap, positively bursting with ideas, but over the past two years just how “bursting” he is has become manifest by his prolific recording.

It was always obvious that Steve Kilbey is an extraordinarily complex chap, positively bursting with ideas, but over the past two years just how “bursting” he is has become manifest by his prolific recording. Since COVID put a halt to pretty much everything, Kilbey has released six albums, one of them, The Hall of Counterfeits, a double-album, 22 songs, recorded with The Winged Heels – classical guitarist Gareth Koch, keyboards player Roger Mason and drummer Barton Price, the latter pair once an integral part of The Models. That was released in June 2021. Now comes album number seven, of skins and heart (acoustic sessions vol. 1). That’s right – Kilbey’s gone back to where it all began – well almost – and revisited the debut album he recorded with The Church back in 1981.

From Canberra to The Church…

I first met guitarist Peter Koppes late in 1979 when he was playing in a band called Limazine and calling himself Peter Marquis. Fronting what was essentially a contemporary covers band was a young Welsh immigrant, Michael Hamer, who’d previously, sung with the Steve Groves Band in the UK, while the rhythm section included bass player David Nicholas, drummer Nik Ward. Juke magazine asked me to pop along to a show and review them. When my then soon-to-be brother in law George Faithfull (at my suggestion) replaced their original keyboards player Becky Samson, Koppes became a friend. 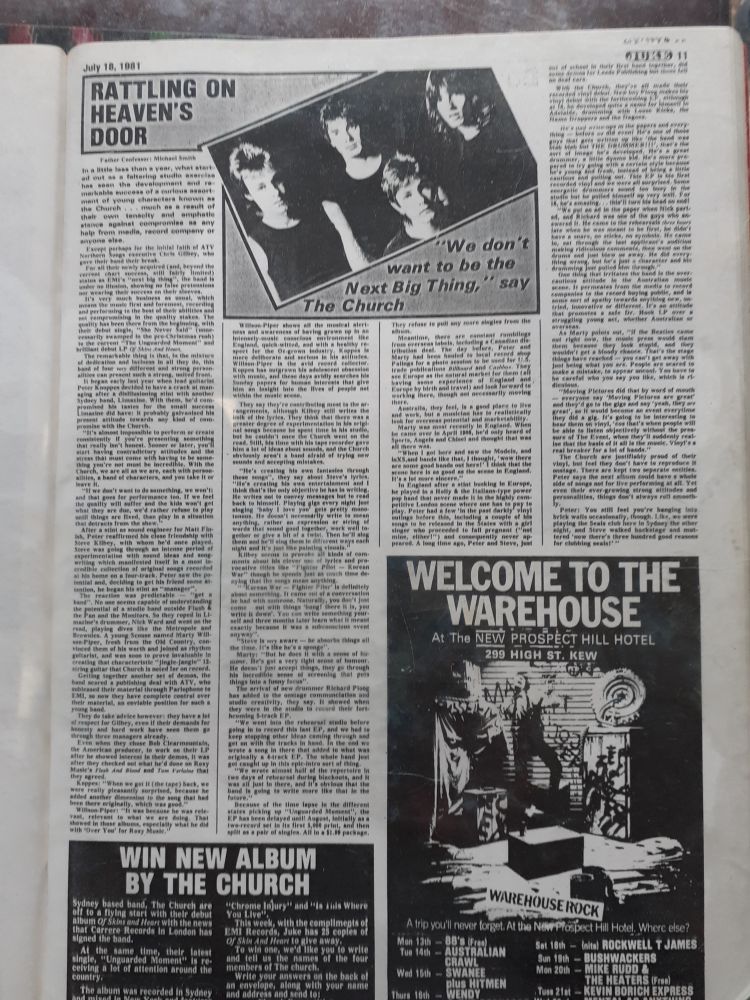 By the end of the year, he’d left Limazine and dropped the “Marquis” pseudonym and was singing the praises of these recordings he’d received from an old friend from Canberra with whom he’d played – Steve Kilbey. Initially acting as agent touting Kilbey’s recordings to the various labels and publishers of the day, it soon became obvious that Kilbey should join Koppes in Sydney, and recruiting drummer Nick Ward from Limazine, the three-piece Church started gigging around Sydney and were soon joined by Liverpuddlian guitarist Marty Willson-Piper, who, having busked his way across Europe, had only recently arrived in Australia. Playing a 12-string rhythm guitar, Willson-Piper brought the “jingle-jangle” to The Church sound. A four-track demo landed on Chris Gilbey’s desk and won them a publishing deal with ATV/Northern Songs, and their publisher alerted EMI Australia, who quickly signed them.

“The Ultravox album, Systems Of Romance, is a record Steve and I both really love and one of the first things we talked about when I joined The Church,” Willson-Piper recalled for me. “When The Church started, we were trying to say it in a different way. We weren’t trying to put it across in different packaging. I’m not saying that we changed the world with our music, but at least we had the thought we could have a go.”

Produced by Gilbey, the debut album, Of Skins And Hearts, was sent to the US to be mixed and mastered by Bob Clearmountain, whose credits included mixing and engineering albums for artists as diverse as Roxy Music, Bruce Springsteen and The Boomtown Rats. It was released on the Parlophone label by EMI in April 1981, reaching #22 in the Australian Album Charts.

“He’s creating his own fantasies through those songs,” Koppes explained of Kilbey’s lyrics. “He’s creating his own entertainment and I think that’s the objective he has in writing. He writes not to convey messages but to read back to himself… He doesn’t necessarily write to mean anything, rather for an expression or string of words that sound good together, work well together or give a bit of a twist. Then he’ll sing them in different ways each night and it’s just painting visuals.”

The first single lifted off the album, She Never Said, didn’t do anything, but the equally enigmatic second, The Unguarded Moment, cowritten with Kilbey’s then wife Mikella Parker, did the trick, also reaching #22 on the Singles chart. By the time the album was released, Nik Ward had been replaced by a young Adelaide wunderkind drummer named Richard Ploog. A re-sequenced version of the album was released internationally the following year, on Carrere in Europe and Capitol in the US. It charted in Sweden and Canada.

In July 2002, EMI Australia reissued Of Skins And Hearts, along with the next three albums The Church released – The Blurred Crusade, Séance and Heyday – digitally remastered and each with an additional CD including multimedia components (videos and short films) from each period and tracks originally released on EPs and singles not previously available on CD. The album was again reissued in 2010, the year The Church were  inducted into the ARIA Hall Of Fame, in a 30th Anniversary Remaster Edition.

And now, the acoustic edition…

Kilbey has “reimagined of skins and heart as a predominantly acoustic album, just guitar and vocals, with the addition of two songs – Sisters and Tear It All Away – which originally featured on the next Church release, a “double-7”-single” titled Too Fast For You. 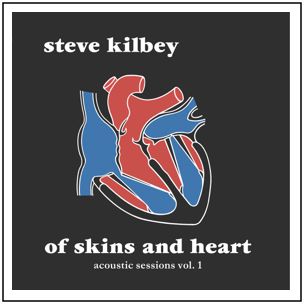 Of Skins And Hearts

1. For A Moment We’re Strangers

6. Is This Where You Live

The first in a series of “reimagined” Church albums in acoustic mode, as well as in CD format, of skins and heart is released by Public Opinion Music March 4, 2022 as a limited edition red vinyl LP.