Santana presents his blessings and miracles

New album from Carlos Santana, Blessings and Miracles, which is released worldwide October 15 on BMG.

When the most successful female songwriter in the world – Diane Warren – released the second single, She’s Fire, lifted off her debut album, Cave Sessions Vol. 1 (Di-Namic Records/BMG), in July, it also served as a handy preview of the new album from Carlos Santana, Blessings and Miracles, which is released worldwide October 15 on BMG. A collaboration between Warren, Santana and rapper G-Eazy – Gerald Earl Gillum to his mum – She’s Fire features on both albums.

Warren’s songs have been recorded by artists as diverse as Cher (who initially hated it!) – If I Could Turn Back Time– Celine Dion – Because You Loved Me (which won the 1997 Grammy for Best Song Written for Visual Media) – and Aerosmith – I Don’t Want to Miss a Thing – among many and have topped the Billboard Hot 100 charts nine times. Warren even co-wrote Joe Biden and Kamala Harris’ US Presidential campaign song, The Change. Her Cave Sessions Vol. 1 was released August 27. Santana has said that for him working with Warren and G-Eazy was a “Healing Force”, pretty high praise for the guitar “King of the collaborative album”.

“The title of this album comes from my belief that we’re born with heavenly powers that allows us to create blessings and miracles,” Santana explains in his website press release for Blessings and Miracles. “The world programs you to be unworthy of those gifts, but we have to utilize light, spirit and soul – they’re indestructible and immutable. Those are the three main elements on this album.” It’s a positive message the world certainly needs right now.

Once again, Blessings and Miracles sees Santana collaborating with as diverse a group of fellow artists as ever. Alongside Diane Warren and G-Eazy, the album features contributions from Metallica’s Kirk Hammett, jazz-rock keyboards player Chick Corea – who passed away February 9, 2021, making his work on Blessings and Miracles, some of his last – Living Color singer and guitarist Corey Glover, and Steve Winwood performing the Procol Harum classic A Whiter Shade of Pale, among others, as well as members of Santana’s touring band including his drummer wife Cindy Blackman Santana and singer Tommy Anthony. Also adding vocals and keyboards to the album track Rumbalero is his son, Salvador Santana, while daughter Stella Santana provides lead vocals on Breathing Underwater.

But it’s the second single off the album, a song titled Move, that’s getting all the attention at the moment. Move sees Santana reteaming with Matchbox 20 singer Rob Thomas 22 years after the pair recorded the Grammy Award-winning platinum single Smooth, which topped the Billboard Hot 100 chart for 12 weeks – it got to #4 on the ARIA charts. That song featured on Santana’s 1999 album Supernatural.

On Move, Thomas is backed by the vocals of New York City rock three-piece American Authors. “Move came about very much like how Smooth happened,” Santana explains in his news release. “It was like divine intelligence behind the scenes, and I just knew I had to record it with Rob. The song is about awakening your molecules. Ignite and activate yourself – you know, move. When Rob and I work together, we have a sound that’s splendiferous.” As for She’s Fire, “I’m so honoured that Diane reached out to me and sent me her songs,” says Santana. The same goes for all his collaborators on Blessings and Miracles: “I don’t choose people – it’s like I’m chosen.” 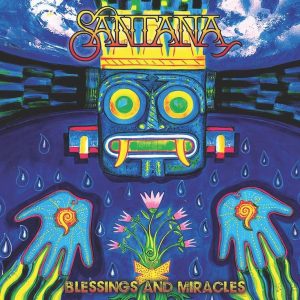 Santana’s Blessings and Miracles tour begins on September 11 at the Borgata Spa & Resort in Atlantic City, NJ, and will make stops in Richmond, VA, Orlando, Augusta, Tulsa, and more before it concludes on October 2 at the Choctaw Grand Theater in Durant, OK.

In other Santana news, the band’s legendary second album, Abraxas, originally released in September 1970 and became their first #1 US album, has been reissued in 180 gram vinyl. 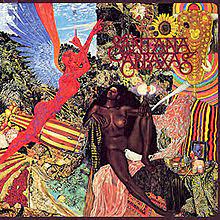