Home » Life Before Chisel and Barnes

Life Before Chisel and Barnes 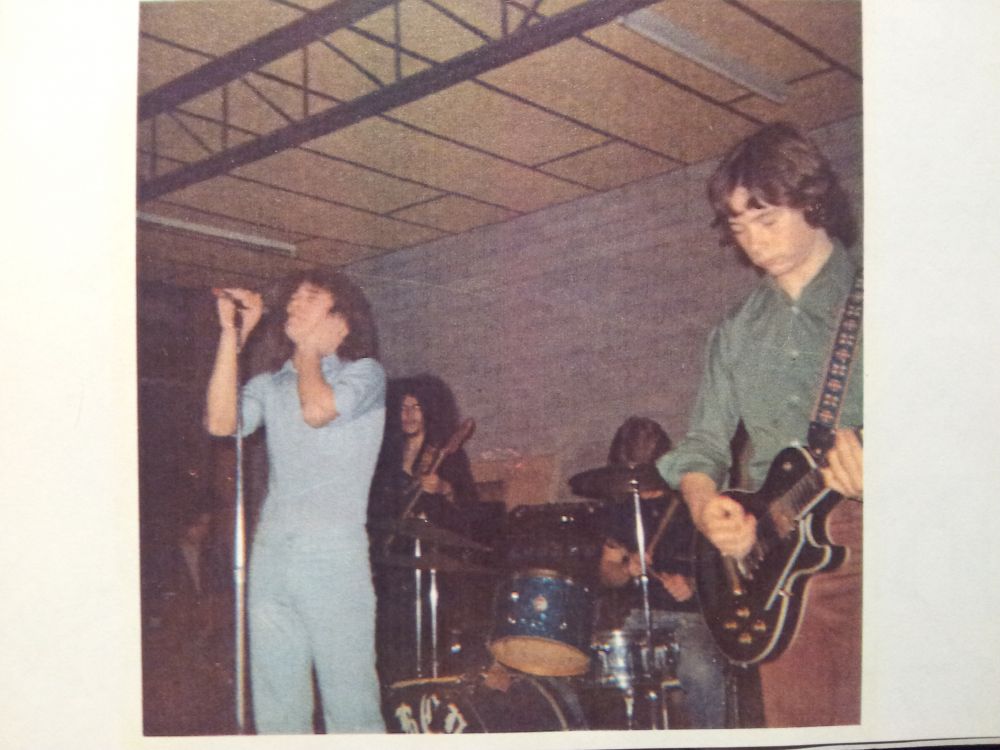 The Story of Tarcus
As July began, Jimmy Barnes broke his own Australian chart record by scoring his 18th #1 with his latest album, Flesh And Blood, his 13th solo #1.

His national Flesh And Blood Tour, having inevitably been rescheduled as a consequence of COVID lockdowns in three states, is hopefully still going ahead in September. There’s bound to be another book in him too, at  Christmas time. The Internet is continually awash with a new clip of Barnesy either singing along with a family member or cooking something. There was a time, though, when no one had ever heard of him.

As it happens, AMMP’s Michael Smith was there.

Tarcus and the Working Class Boy
As Jimmy points out in his best-selling first volume of autobiography, Working Class Boy, the accompanying photo is the only known image of the short-lived cover band he was in, aged 16, before getting the call to join what became Cold Chisel.

The band was called Tarcus, taking its cue from the Emerson, Lake & Palmer album of the time, Tarkus.

I suppose I should introduce myself. I’m the guy in back of Jim, resplendent as he is in his powder blue shirt, me in black denim jacket with the hair and a goatee, all I could manage to grow at the time and for many years to come – Michael Smith, bass player (Jim is very generous in his comments on me on pages 305 and 343 of his autobiography).

The photo was probably taken by my then girlfriend Lanie and it’s been in a draw for years, dug out when I got a call from Jim wondering about those fleeting months together in Tarkus.

I guess that’s how things go. Lanie and I parted in less than ideal circumstances a couple of years later, sadly something of an unhappy pattern at various times in my emotional life but that’s another story.

John Swan
I got the gig courtesy of Jim’s big brother John Swan, who I’d first seen in action, both of us 12 years old, about a week into starting at Elizabeth West Primary School (now Davoren Park).

I’d only been in Australia six weeks or so from London – well Dagenham really, where the family had moved in 1961 from the still bomb-site-riddled slum part of Islington where I was born – so I missed The Beatles’ only Australian tour by a month!

Anyway, it’s a Friday morning and we’ve all been herded out onto the school’s vast quadrangle, the hot September sun already beating down heavily and the Headmaster is about to do his bit. Drumming us all out in lines is a kid in a kilt with a snare drum – John Swan aka Swanee.

In Fourth Year I remember sitting next to – when he bothered turning up – a kid named Ronnie Peers. Turns out he was a guitarist and his absences were mostly down to gigging round the place with a blues band called Hard Time Killing Floor, in which Swanee was playing drums. Ron later found fame in a band called Stylus playing blue-eyed soul.

Steve Prestwich
In that fourth year of high school I discovered guitar. By the end of high school I’d managed to become a barely adequate singer and guitarist. Luckily, a couple of years later, at a Christmas party at Lanie’s parents’ place in December 1971, I met a real guitarist and singer, John Pryer, who was jamming away in a corner of the garage with a young drummer fresh off the plane from Liverpool named Steve Prestwich.

John had an imitation Hofner bass there and somehow, in a moment of obvious unfounded hubris, I picked it up and we three jammed away. Suddenly I’d found my musical voice.

As Ice, we played our first gig at the YMCA in Elizabeth, inexplicably dubbed Black Coffin for the night, in April the following year. Mostly covers with a couple of originals by John, over the next year we played about 20 gigs before it fell apart. 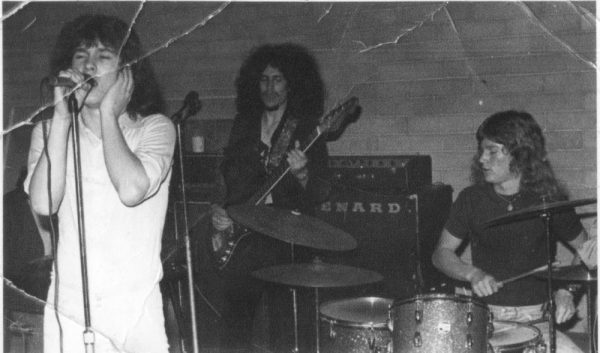 I was still studying at Adelaide Uni at the time and one evening in I think July 1973, I’m checking out Blackfeather, who were playing in the Refectory, touring on the back of their hit single of the day Boppin’ The Blues and I bump into Swanee who asks me if I’m interested in playing in his little brother’s band, and of course I am.

I remember going round to the family home in the next suburb up, Elizabeth Fields, and meeting the family properly and discovering that Swanee isn’t just a drummer but also an incredible pianist!

There were rehearsals and I remember we were playing some Free and Cream songs, and Uriah Heep’s Walking in Your Shadow, which guitarist Mark Lacey must have taught me since I didn’t hear the original until years later. I’m pretty sure our first show was at the YMCA in Elizabeth, which is where we are in that photo.

Anyway, there were probably only four or five gigs we played together all up, but the only other shows I can remember clearly were at the Institute of Technology Refectory, which I wangled for us through my oldest school friend who was studying there – we earned all of $12 and a bottle of Scotch between us on the night, and we all agreed that Jim could take the Scotch! – and the last show we played, in Murray Bridge, in some sort of big tent affair from memory. And that was it. About four months.

The next time I saw Jim was late November 1973 when Lanie and two of her girlfriends, who were all Scorpio girls, decided to have a combined birthday party/dance at Spruance Road Hall just opposite where Steve’s family used to live in Elizabeth East and booked Jim’s new band to play.

That was the first actual gig that Cold Chisel played, and that night, John Pryer and I joined Steve for a three-song “reunion” of sorts during one of the breaks late in the evening, the last time I got to play bass to Steve’s drums.

Mark Lacey and I reunited in 1974 in a four-piece cover band put together by a DJ at Adelaide’s top station at the time, 5KA, who was looking to get into band management.

As Slim Pickings, fronted by a young singer named Stewart MacFarlane and with a drummer named Paul Kelly [obviously not the singer-songwriter], we gigged around Adelaide for the year before an offer he couldn’t refuse saw MacFarlane move to Sydney to front a band called Burlesque Review before heading off to New York City, where in 1976 he formed a band called Endgame.

Meanwhile one afternoon I accompanied Paul Kelly to the Salisbury Campus of Adelaide Teachers College where he was auditioning for a Genesis cover band.

When the singer, Stuart Kerrison, asked what sort of stuff I played, we jammed on a couple of Sweet and Bowie songs and next thing you know, the Genesis idea was dropped and 1975 saw me, Paul, Stuart, keyboards player Chris Harriott and guitarist Paul Irving pumping out Sweet, Bowie and Sparks songs as Roadwork.

Years later, when I read Toby Creswell’s 1998 biography of Jimmy Barnes, Too Much Ain’t Enough, I discovered that when I joined Tarcus I’d replaced a guy named Stuart Kerrison! Funny the way things work out.

Guitarist Mark Lacey never left Adelaide. There were more bands of course – one called Static, followed by one called Stray Dogs in the early ‘80s, the latter lineup including guitarist Paul Irving from Roadwork.

I discovered years later that through the rest of the decade and beyond, Mark suffered from bouts of severe depression, though he continued to play and ever more brilliantly. Perhaps he stopped taking his medication but it seems one day he decided to take a walk, straight into the oncoming traffic.

Mid-October 2019 a number of my Elizabeth High School cohort, those of us who had done their matriculating year together in 1969, gathered together for a 50th anniversary reunion, and to my surprise, I discovered that that photo of Tarcus taken by Lanie ISN’T the only extant one!

Not only that, but we also had a keyboards player I’d forgotten all about!! So here are THREE photos from the very beginning of the rise and rise of Jimmy Barnes, fronting Tarcus – Jim on vocals, Mark Lacey on guitar, Stewart Wilkinson on keyboards, myself on bass and Steve Thompson on drums. Sadly both Wilkinson and Thompson have also passed away. So it’s just me and Jim still standing. (Main image: Copyright Michael Smith).

Jimmy Barnes on Tour in September 2021