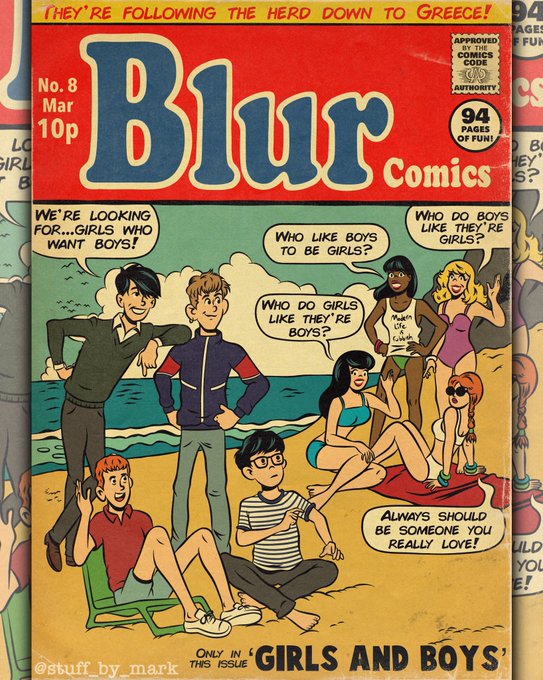 The definitive Britpop band is still a firm presence, thanks to Twitter. Artist  @The_Ren1981 runs one of the many accounts featuring Blur.

Archived Blur listening parties, hosted by Tim Burgess and starring Dave Rowntree, are part of an ongoing wave of exclusives, podcasts and new solo releases for fans in 2021. Catch up here.

Tim’s Twitter Listening Parties
Every night across Britain, usually at 10:00 p.m. GMT, a different artist or band member recruited by Tim Burgess live-tweets one of their albums, and fans at home can all press “play” simultaneously and follow for unheard insights, unseen photographs and memorabilia.

Burgess originally intended the listening party as a one-off event for the Charlatans’ album Some Friendly, “But it occurred to me that it would be really inclusive to invite people I know from other bands to host more of them, to share their firsthand insight on their own work,” he told Rolling Stone.

You can now remain updated on Blur on Twitter, with the archived listening Parties – but also tune in to a Dave Rowntree Podcast

The Nearer The Fountain, More Pure The Stream Flows, the new studio album from Albarn, will be released by  his new label home Transgressive Records on 12th November 2021. Pre-order the album or find the single now.

Beyond the Twitter listening parties promoted via Blur’s official account there have been over 750 installments of Tim’s Twitter Listening Party, drawing in members of such bands as Iron Maiden, Culture Club, Tears for Fears, Japan, the Smiths, the Go-Go’s and New Order. The  hashtag is always there – #TimsTwitterListeningParty.

As the NME reported,  “What was once a one-man record club now has its own online hub where you can replay every single listening party in real time (962,000 replays and counting), watch Tim lounge his way through post-party Zoom ‘aftershows’ with his guests in a variety of fan-knitted jumpers or watch the peroxide prince transformed into an 8-bit computer game. It’s got its own emoji.”

To find out what Best Days means to Dave Rowntree or why Blur enjoyed a shared gig with The Specials so much, you can rewind both The Great Escape and Parklife parties online now.

Blur and The Specials – Nite Klub 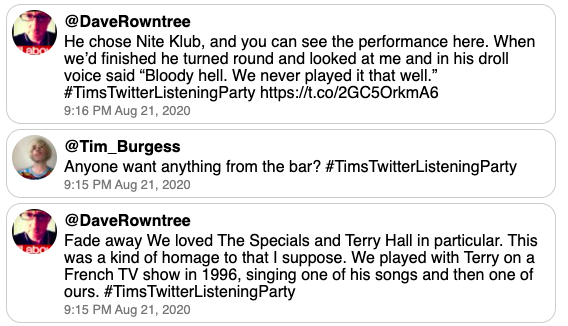