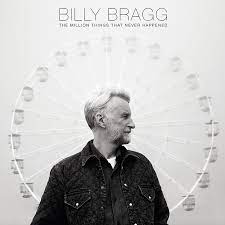 Return of the Barking Bard
It’s being billed as the first pandemic blues album of our times, and perhaps it is. Either way, The Million Things That Never Happened, due for release in October, is the first full-length studio album from the inimitable Billy Bragg in five years, and for the first time includes a song cowritten with his son Jack Valero, Ten Mysterious Photos That Can’t Be Explained, which finishes the new set.

I Will Be Your Shield has been released as the first single. “To me,” Bragg says, I Will Be Your Shield “is the heart and soul of the album. I’ve come to the conclusion that empathy is the currency of music; that our job as songwriters is to help people come to terms with their feelings by offering them examples of how others may have dealt with a situation similar to that in which listeners find themselves. After what we’ve all been through, the idea of being a shield, physically, emotionally, psychologically, really resonates.”

Freedom Day
As much of the population of the UK embraced “Freedom Day” with a vengeance, Bragg has taken to Twitter to point out that “while UK suffers the second highest number of active cases in the world, this is not the time to let down our guard. I’m going to carry on wearing my mask in shops to protect myself and those around me. Let’s enjoy the sunshine, but stay safe.”

It’s a message that obviously resonates well beyond the shores of Old Blighty, as the Delta Strain wreaks havoc across too many states of the US, Europe, Asia and Australia.

Bragg himself explains that the album “isn’t about the pandemic per se, but the highs and lows of what we’ve been through provide the backdrop for the album, as they have done for all our lives over these past two years.”

September 2021 Concert
If you can’t wait until October, on Thursday 9th September, a month before the album’s release, Bragg will be presenting an online concert that’ll be streamed on the Stabal platform, on which he’ll be joined by the band that joined him in Echo Zoo Studios; his son Jack and Romeo Stodart on guitars; Nick Pynn on lap steel and violin; bass player Michele Stodart and drummer Darren Beckett.

Tickets go on sale at 9am British Standard Time on Friday 23rd July. Also on offer are On-Demand passes with bonus features that will include extra encore performances, exclusive interviews, a look at his new album, an in-depth songwriting discussion with Billy and Romeo, plus a behind-the-scenes look into the making of ‘Billy Bragg on…’

The full tracklisting is:

Following a run of shows through the UK and Ireland October and November 2021, Bragg will be touring Australia & New Zealand through January and February 2022, with tour dates as follows:

These shows will once again follow the One Step Forward, Two Steps Back format of his 2018-19 shows whereby he’ll play three consecutive shows over three nights at each venue, with the first night a current, mixed Bragg set, the second from his first three albums and the third from his second three albums.