Ross Wilson 2021 Tour
Marking 50 years since Eagle Rock and Daddy Cool at the Myponga festival, Ross Wilson is back on tour in 2021. Story: Michael Smith.

It was going to be South Australia’s own Woodstock, and headlining the three-day festival over the last weekend of January 1971 at a rural site 53 kilometres south of Adelaide called Myponga were Cat Stevens and Black Sabbath no less. 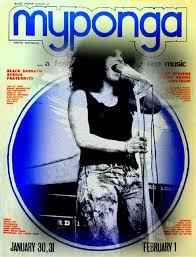 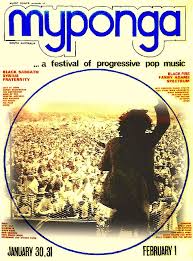 So I rolled up a blanket and headed off, wide eyed, clueless, headed for the Main North Road, stuck out my thumb and somehow managed to get there, on the back of an open truck, shared with, of all people, the MC for the event, the eccentric Adrian Rawlins.

Little did anyone know but it was an unknown Melbourne band added to the bill at the last moment that would ultimately be the one that would become the biggest in the land within a couple of months – Daddy Cool.

From Myponga to Eagle Rock
“We did two performances at Myponga,” Daddy Cool frontman Ross Wilson remembers, “one in daytime and one at night, and the amazing thing about that footage is that normally you would see that kind of reaction for a band who’d had a record on the charts and success already but we hadn’t even been into the studio at that stage and there’s all this wild audience reaction, goin’ off and havin’ a good time.”

Now, the footage Wilson talks about is of one of those performances that ended up being incorporated in the clip that accompanied the release of Daddy Cool’s debut single, Eagle Rock, which had been filmed by a friend of Wilson’s, former 18th Century Quartet and Myriad Consort bass player, Chris Löfvén.

The Aztecs and Fraternity at Myponga
“The Myponga setting is important,” wrote organisers Alex Innocenti and Trevor Brine in the program for the event, price 15c, “as we hope it will convey the ‘mother earth’ feeling lacking in the cold, concrete world that most of us have grown up in.”

Syrius and Jackie Orszáczky
The lineup did actually include one other overseas act in Hungarian prog-rockers Syrius, which included bass player Jackie Orszáczky, who would become an enormously influential musician on his return to Australia to live in 1974. 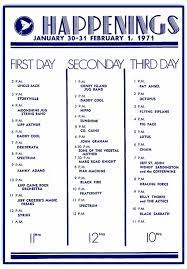 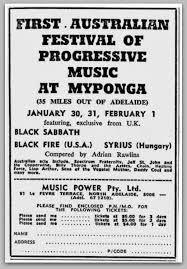 The Birth of Eagle Rock
It was 1969 and his last band, The Party Machine, which lineup included guitarist Ross Hannaford and expat New Zealander guitarist-turned-bass player Mike Rudd, had folded and a phone call offering him a gig in London fronting one of Australia’s most progressive bands, Procession, seemed too good an offer to ignore, so Ross Wilson had jumped on a plane. In the event, Procession was already falling apart, as so many Australian bands trying their luck in the UK in the ‘60s had, and Wilson found himself adrift.

As he pondered his options, he happened to be reading a newspaper and noticed the caption under a photograph of a group of young African-Americans that said they were “doing” the eagle rock.

The phrase struck a chord and seemed to match a guitar phrase he’d stumble on as he tried to teach himself the finger-picking guitar styles of 1920s.

“I didn’t finish it until I got back to Australia. I had the riff and a sort of idea for the verses, but the chorus, I remember sitting back at my parents’ place in the room I grew up in and having access to a guitar again and coming up with the chorus. The chorus provides the relief in the song and it’s very typical of how I write songs. There’ll be like a whole lot tension in the verses and then relief in the choruses, and then you get back to the groove again.” (Pictured: Ross Wilson in the famous clip, preserved at the National Film and Sound Archive). 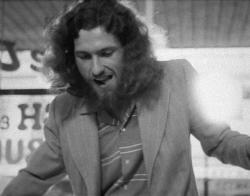 The Road to Daddy Cool
Essentially a rhythm guitarist, while in London, Wilson had started listening to a lot of John Lee Hooker blues boogie and 1930s country blues. He returned to Australia via Europe and Asia later that year and somehow ended up working as a labourer up in the Northern Territory capital, Darwin.

“The interesting thing about Darwin was that all these ideas were formulating in my head. Doing all this manual labour I was working out all these tunes, and I was writing this simple ‘50s-oriented stuff. For some reason I was re-interested in that early rock stuff and that doo-wop stuff that hadn’t reached Australia, that had existed in America in the early ‘50s but that was the reason rock’n’roll had come about and it was pre-rock’n’roll becoming a worldwide thing, all this music from the late 1940s to the ‘50s. Now these songs were to become a part of Daddy Cool’s repertoire.”

Sons of the Vegetal Mother
Not that Eagle Rock was necessarily the direction Wilson imagined his musical future. He was fascinated by the music of Frank Zappa and to that end, he’d pulled together a loose “progressive” lineup of a dozen likeminded musicians he dubbed Sons of the Vegetal Mother, the core of which was his old Party Machine buddy Ross Hannaford, bass player Wayne Duncan and drummer Gary Young.

“All the members of Sons of the Vegetal Mother had a sympathy for early rock,” Wilson explained to me. “Gary and Wayne had started playing in teen Shadows-type bands in the late ‘50s early ‘60s and had graduated into backing Bobby & Laurie and being pop stars. Then you had Ross Hannaford and myself, who had this excitement for the blues, which we had started playing together. So it was the perfect get together of the two sections. They were a real unit; they’d worked together so long. So all of us had this sort of depth of knowledge about where music had come from and how rock’n’roll evolved. That’s how Daddy Cool came about and that’s why Daddy Cool was so good at what it did.

“We played Eagle Rock in Sons of the Vegetal Mother too, so that song was very much in the forefront of my mind. I felt it had something and even before I put the Sons together I was going around reconnecting with my old buddies and going, ‘Hey, do you think you’d like to do this song?’”

“I think it was called the Glenelg Blues Festival,” Wilson remembers the very first gig Daddy Cool, back in October 1970 at Glenelg Town Hall, which had been set up by aspiring percussionist, clothing retailer and rock promoter Alex Innocenti, “and he booked Sons of the Vegetal Mother because he was a fan of mine from The Party Machine and whatever, and we went over and said to him we were also bringing over this side group, Daddy Cool – we wanted to try them out too – from within the members of Sons of the Vegetal Mother. The official biography says that we did an impromptu performance replacing someone that didn’t turn up but I’ve seen a poster for that gig and Daddy Cool is billed on it so that can’t have been true!”

Daddy Cool at Melbourne Town Hall
“We headlined a Melbourne Town Hall show and I remember seeing someone hanging off the balcony, and that’s quite high! That show is the photo on the inside of the Daddy Who? Daddy Cool! album. I think that’s the one that put us through the roof and that’s where we first met Robie Porter, who ended up producing us. We decided we’d sign with Sparmac because I’d had a bad experience with EMI with The Party Machine. We’d only done one single and they’d never paid us and so I thought we’d go with an indie, and the indies were happening then because there was a big record company dispute and our mates Spectrum had signed with EMI/Harvest and felt they were constricted a bit, being told what to do by them, and I didn’t want that to happen to us.”

“We released Eagle Rock and it went to #1,” Wilson continues, “released the album and by the time we had finished, it had sold 60,000 copies, which was unheard of for an Australian album. Back then, 10,000 was regarded as good.” In fact, on the day of its release in May 1971, people queued up along Melbourne’s Bourke Street to buy copies of Eagle Rock, which was equally unprecedented for an Australian act or record at that time.

The single ultimately sat at #1 for eight weeks nationally and a staggering 17 weeks on the Melbourne charts. Daddy Who? Daddy Cool! was released in July, similarly topped the album chart for seven weeks, reached gold LP status within a month and went on to sell more than 100,000 copies, the first Australian rock album to do so, while Daddy Cool were voted Best Group in 1971 in the Go Set Pop Poll and also Best Group in the TV Week King of Pop Awards. Eagle Rock influenced Elton John’s Crocodile Rock and prompted Marc Bolan to demand a meeting with Wilson when T Rex toured Australia in November 1973.

(All quotes are drawn from What’s Been Did (And What’s Been Hid) Volume III: Album Rock to Glam Rock: 1970-1976, by Michael George Smith, The Rupert Press, available through Amazon.)

Ross Hannaford and Wayne Duncan
Ross Hannaford passed away March 8, 2016, followed December 4th that year by Wayne Duncan, so, of course, there was no chance of a Daddy Cool reunion to celebrate the 50th anniversary of the release of Eagle Rock.

That’s not going to stop Ross Wilson, who will hit the road between August and October to celebrate not only the song but also the band and their legacy as well as perform songs from across his storied career, including from his Mondo Rock and solo years and even Sons of the Vegetal Mother.