Home » Stevie and the Summer of Soul

Stevie and the Summer of Soul 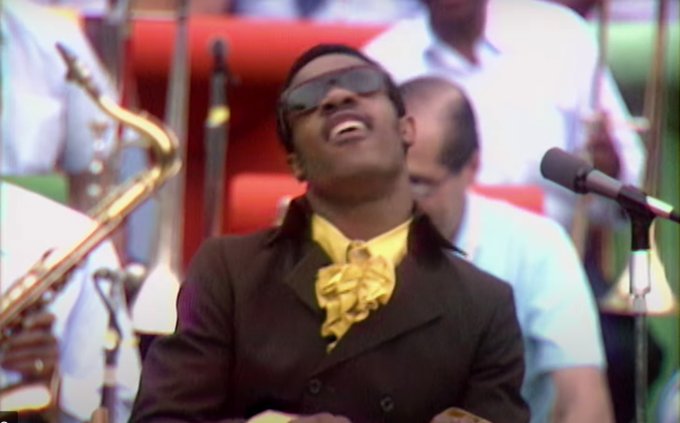 When the Revolution Could Not Be Televised
Stevie Wonder is just one big name captured in the July 2021 documentary, Summer of Soul.

January 28th, 2021 saw Ahmir “Questlove” Thompson at the Sundance Film Festival presenting the world premiere of his first film as a director. Titled Summer of Soul (…Or, When the Revolution Could Not Be Televised), it won him both the US Grand Jury Prize and the Audience Award in the US documentary category.

With the contemporary cinematography handled by Shawn Peters, whose previous films have included Random Acts of Flyness and Goldie: Slick Woods, Questlove was able to draw on some 45 hours of previously thought lost footage from the free six-week festival, which had included performances by BB King, Stevie Wonder, the 5th Dimension, Sly and the Family Stone, Nina Simone, Max Roach and Abbey Lincoln, Hugh Masekela, Max Roach, Gladys Knight & the Pips, David Ruffin of the Temptations, Mahalia Jackson and many more, a truly diverse showcase of the breadth and depth of African American music at the time, covering everything from Motown pop to jazz to Afrobeat to gospel to psychedelic funk. Oddly, neither the event nor her participation in it warranted a mention in Simone’s 1991 autobiography, I Put a Spell on You.

As it happens, Summer of Soul documents the third annual Harlem Cultural Festival, which had been organised by a singer and concert promoter named Tony Lawrence. Born on the Caribbean island of St Kitts, Lawrence had originally come to Virginia as a child with his parents, but seems to have grown up in Pittsburgh before moving to NYC and establishing himself as a nightclub performer, earning the nickname The Continental Dreamboat.

He released at least seven singles, including Put De Money Where De Mouth Is, Million Words, You Got to Show Me and De Limbo Dance, between 1960 and 1962. Silver Bid Records’ promotional advertising for the May 1961 release of You’ve Got To Show Me touted Lawrence as the “most talked about young singer in the world”, while the July 8th issue of Cash Box noted that “Tony ‘The Continental Dreamboat’ Lawrence follows his successful stand at the Fabulous Dunes in Jersey with one at the Towne House in Pittsburgh – with Jackie Wilson – starting July 16.”

In 1967, Lawrence launched the first Harlem Cultural Festival. The second annual festival ran over nine Sundays between June 30 and September 6 and had featured Count Basie, Herbie Mann and Mahalia Jackson among others. As part of the promotion of the third annual festival, in June 1969 Lawrence released a single he’d co-written on the Lo Lo label unashamedly titled Harlem Cultural Festival.

Held in Harlem’s Mount Morris Park, which has since been renamed Marcus Garvey Park, in order to make the festival more people-friendly, Lawrence had been able to get the New York Police Department to minimise its presence, calling on the local chapter of the Black Panthers provide security for the talent.

Unfortunately whatever ambitions Lawrence might have held for both the future of the Harlem Cultural Festival or the film of the 1969 festival were completely overshadowed by another festival that took over Max Yasgur’s dairy farm 65 kilometres southwest of a town called Woodstock over three days of the August 15 weekend. Fifty-three years on, everyone knows about Woodstock. Before Questlove made it his mission to recover the footage, no one remembered Lawrence’s Harlem Cultural Festivals.

Recognising the way the wind was blowing, once the festival was over, Lawrence had opted to describe the 1969 festival as the “Black Woodstock”. Even so, he couldn’t find a distributor for the film and it was soon set aside and forgotten. Things seem to have become quite murky for Lawrence over the next few years. According to a request by one Elisabeth McGlynn to the NYPD for any documents they might hold with regards to the promoter, “In 1971-72, Lawrence claimed that his lawyers and business partners, Jerrold Kushnick and Harold Beldock, had stolen several hundreds of thousands of dollars from the festival’s fund.

Tony Lawrence and the FBI

Tony Lawrence also claimed that his car had been bombed and that the FBI was aware of this bombing. I’d like any record of this bombing or of the cases he brought against his lawyers.” (20/11/19) Her request was denied! It seems there are no records on Lawrence after 1972, though it seems he might have headed for Europe – he’d performed in Paris in the ‘60s – as there are a couple of singles attributed to him released by a Portuguese label in the late ‘70s.

“Questlove,” notes The Guardian’s film reviewer Jordan Hoffman, “turns to some of the surviving musicians (and other celebrities) to offer commentary while looking at the material again all these years later, but the most touching moments come from concertgoers who were simply kids from the neighborhood reflecting on a transformative summer.” (January 30, 2021)

Summer of Soul is scheduled for released in the US on July 2nd, 2021, by Searchlight Pictures and Hulu, with the film also set to be distributed internationally July 16th as well as through Disney+ under the Star content hub and Star+ from July 30.