Live in concert was always the best way to experience the extraordinary, nay magical artistry – he wasn’t called The Wiz for nothing – that was Phil Emmanuel, electric guitarist. He’d launch into a piece with such obvious glee, a wicked twinkle in his eyes telling all around that here he was again, in that special place that had given his life its meaning and direction, pulling the most amazing, sometimes seemingly impossible riffs from his guitar without the slightest hint of self-consciousness or pretention. His playing, informed by the most remarkable technical ability, was never a showcase of that technical ability – it was always about the pure, unadulterated joy of playing – and playing in the moment. It’s all there, in spades, in his 2002 DVD, Phil Emmanuel: Live in Concert.

Though I interviewed both he and little brother Tommy Emmanuel in 1983 for one of those “technical” features on the guitars and amplifiers they were using for RAM, it was Tom I got to know properly when I helped put together a press biography for his debut solo album,

Up From Down Under, released in 1987 on Robie Porter’s Artful Balance label. That came courtesy Jon Ashcroft, who was working for Col Joye Management but was also managing the band I was in at the time, Cruise Control. Tom and I got quite close for a few years, having the odd dinner together, our respective young daughters playing together. Then it all took off for him with his 1991 debut Sony Music album, Determination. But I digress…(Below: Phil Emmanuel: Brass Monkey) 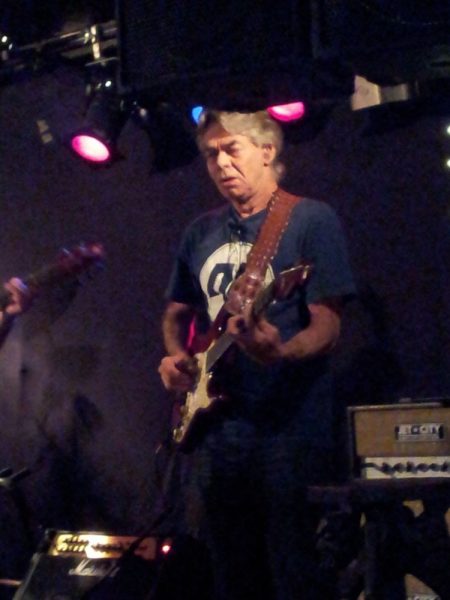 Phil and Tommy grew up in regional NSW, Phil four years older, and thanks to radio, the brothers got to hear all those early ‘60s surf guitar sounds so popular at the time. More importantly, Phil got to hear The Shadows. “Huge impact mate,” Phil said to me, referring to their lead guitarist Hank B. Marvin. “They were the flavour of the year, The Shadows, and that was the measure of a good guitar player back in those days. There were lots of adults playing Shadows stuff but Tommy and I used to look at each other and say, ‘We can do it a lot better than that!’ I’d say to Tommy, ‘I know you can do the rhythm better,’ and he’d go, ‘You can do the lead better too.’”

By the time Phil was ten and Tom six, they were touring all over the place with their banjo and Hawaiian steel guitar-playing sister Virginia, under their parents’ wings, initially as the Emmanuel Quartet and then, in 1963, as The Midget Surfaris. We’re very lucky here in the Land of Down Under,” Phil Emmanuel explained. “We get to listen to what’s coming out of Britain and have a listen to what’s coming out of America and take the best of it and blend it all together.”

Another huge influence was the instrumental themes of the golden years of early television in Australia, awash with westerns, TV shows like Gunsmoke and Bonanza, alongside movies like The Magnificent Seven and High Chaparral. When that split in 1966, the brothers joined a band called The Trailblazers, with whom they played until 1970, though before that broke up, they won a couple of TV talent quests and recorded an independent EP which was released on the CM Twin City Country Sound label. (Below: Phil Emmanuel and Michael Smith) 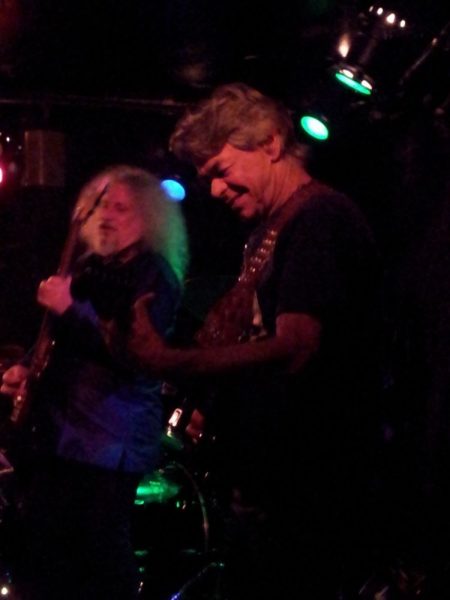 Over the next few years the brothers went their separate ways, Phil forming a band in 1979 called King Dog in order to back Gillian Eastoe. Tom meanwhile had been in Doug Parkinson’s Southern Stars and then John Farnham’s band, but late in 1982, Phil joined a Sydney country-rock band called Goldrush, Tom joining them soon afterwards – as their drummer! When Goldrush took a break, the pair would go out and play as The Emmanuel Brothers Band, Tom back on acoustic guitar, Phil the electric.

Sadly, Phil didn’t leave much by way of a recorded legacy of his 55 years as a professional musician. As well as two singles with Gillian Eastoe & King Dog and a live album and three singles with Goldrush, there were just six Phil Emmanuel albums and a compilation CD, and three of them saw him sharing the credits with another guitarist – 1994’s Terra Firma recorded with his brother Tommy (his only major label release), 2013’s independent release, Chariots of Fire, with another young gun acoustic guitarist, Rob Bostock. And now, posthumously, Thunderbird Legacy, recorded with NSW Central Coast-based acoustic guitarist, Jacob Funnell, with whom Phil had been performing in a duo on and off over the last few years. It was live on stage, shredding away, that Phil Emmanuel felt most comfortable.

Phil wasn’t a particularly a prolific composer either. He wrote five pieces for 1992’s Kakadu Sunrise album, including the title track, one for Terra Firma, which also included Love Gone West, cowritten with Tommy, and now two final compositions for Thunderbird Legacy – Gallaghers Lane and Bend It Like Brabham. In the end, none of that mattered. Phil Emmanuel was a master arranger and musical interpreter. The playing was the thing, and having fun with the tunes being played. And boy did he always have fun! I was lucky enough to play bass to his guitar whenever he got to chance to be a guest on a Steve Flack’s Guitar Heroes showcase gig. It was unbelievable, the exhilaration as he’d take off into the stratosphere while former Masters Apprentices drummer Colin Burgess and I would try to hold him tenuously – thunderously – earthbound as best we could. Capturing that in the studio was like trying to hold quicksilver in the palm of your hand.

The version of The Beatles While My Guitar Gently Weeps on which Phil trades riffs with Flack included on Steve Flack’s Guitar Heroes’ Volume II, released in July 2014 on Regal Records, is pretty impressive, though there the rhythm section is bass player Ron Philpott and drummer Gordon Rytmeister. In concert, with the heavier rock groove of myself and Colin Burgess, the song flew hard and high.

The Guitar Heroes only did one interstate run – three shows in Melbourne in January 2010 – with the showcasing guitarists Chain’s Phil Manning, Kahvas Jute/Chariot’s Dennis Wilson, The Atlantics’ Martin Cilia (I was also in The Atlantics at the time) and Phil Emmanuel – and we were lucky someone decided to record the final show of that tour at the Brunswick Social Club, because we have a record a fiery version of The Atlantics’ Bombora. The song inevitably blew out from three to seven minutes as Phil and Cilia traded classic surf and Shadows licks as Colin and I did our best to keep up. That’s included on the project’s Volume III.

NSW Central Coast-based producer and multi-instrumentalist Parris Macleod, who plays the keyboards here, has managed to make a pretty good fist of capturing Phil’s innate joy in performance on Thunderbird Legacy. Accompanied by guitarist Jacob Funnell, bass player Brad Wenham and drummer Tom De Voss, Phil couldn’t have kicked things off with anything bigger or more majestic than the theme to the 1958 Hollywood blockbuster The Big Country, with Macleod providing the epic synthesised orchestral parts with equal vivacity. Phil also takes on the themes of The Iron Horse in a medley he dubbed Ranch Night. For all that, you can still hear a little something of the debt the young Phil owed to The Shadows’ Hank B Marvin in those early years learning his craft, a debt he repays in his version of Shadows 1964 hit Fandango. And you can hear the enormous fun he was having revisiting these tunes, for the most part lost to today’s generation.

You can also hear the romantic in him in his sensitive reading of Wichita Lineman, which was of course a hit for another superb though underrated guitarist, Glen Campbell, followed by a truly sublime version of Hans Zimmer’s Thunderbird, from the Thelma & Louise soundtrack. Again, Macleod’s orchestration helps lift Phil effortlessly onward and upward. Talking of sublime, Don Walker – and Ian Moss for that matter – would have to have been blown away by Phil’s reading of the Cold Chisel hit Four Walls, cinematic, climactic and yearningly wistful by turns. And only a true “wizard” could have overcome the clichés that have accreted to ABBA’s Fernando to attain a kind of subdued majesty in this unlikeliest of versions.

Of his own compositions, Gallaghers Lane tumbles along with the kind of elegant grace and melodic ease that has been the hallmark of brother Tommy’s work, which just goes to show how attuned to each other as players and composers they always were and how much more Phil was capable of creating in his own right had he lived. Bend It Like Brabham is classic “chicken pickin” as Chain’s Phil Emmanuel would describe it, one of hallmarks of the Emmanuel brothers throughout their careers, together and apart, spawned by their love of Chet Atkins and here something of Phil’s last laugh, his grin as big as the Grand Canyon as those fingers fly like no one else.

Engineer Don Bartley finished mastering Thunderbird Legacy just the day before Phil sadly passed away as a result of an asthma attack he suffered while visiting his brother Darcy in Parkes in regional NSW May 24, 2018. He was just 65. Phil was posthumously awarded the Order of Australia Medal and a Master of Music from CQ University. He’d been inducted into the Australian Country Music Roll of Renown back in 2011.

The Thunderbird Legacy album by Phil Emmanuel with Jacob Funnell is distributed by MGM.

By Michael Smith, former Associate and Contributing editor at The Drum Media and The Music, freelance music journalist for RAM, Juke, On The Street, JAMM, Sonics and way more, freelance book reviewer for Overland, Island and Quadrant, author of What’s Been Did (And What’s Been Hid): A Narrative History of Australian Pop and Rock, two volumes completed to date, Volume I covering the artists and acts that emerged between 1955 and 1963, Volume II those between 1964 and 1969. Bass player with Mushroom signing Scandal 1976-78, and legendary instrumental surf guitar band The Atlantics 2006-12.