A Beatles fan shocked auctioneers by spending £37,200 on the Abbey Road street sign sold by Westminster Council, recently  – 37 times higher than its initial estimate of between £1,000 and £2,000.

So what are we bid for a rare Paul McCartney acetate of his alias Percy Thrillington, on eBay? The instrumental version of his album with Linda McCartney, RAM, it’s a long way from Get Back.

The new film, from Peter Jackson, scheduled for 2021, is sending Beatle memorabilia prices higher than usual.

When Money is Money

Pink Floyd’s Abbey Road ‘Money’ acetate is currently valued at US $25,000 on eBay.

Abbey Road acetates are highly collectable, because of The Beatles’ connection, the fame of the studio and the one-off nature of the item.

Museums like the Liverpool Beatles’ Museum can only store so many Fab Four valuables – and even the new ‘Beatles’ hotel’ now under construction at the old Casbah Coffee Club, where they began their career at 8 Haymans Green, in West Derby Village, Liverpool – can only hold so much.

So, it’s over to private collectors. And Paul McCartney’s secret alter-ego is definitely on the map, even though Percy seldom turns up there.

The instrumental cover version of Paul and Linda’s 1971 Ram was shelved from June 1971 and only released in April 1977. The liner notes were written by Clint Harrigan – AKA Paul McCartney.

McCartney finally admitted his role to journalist Peter Palmiere at a Los Angeles press conference on 27th November 1989 during his world tour: “What a great question to end the conference. The world needs to know! But seriously it was me and Linda – and we kept it a secret for a long time but now the world knows! – you blew it!”

In 1990 Paul McCartney also admitted to Palmiere, via an autograph request, that he was indeed Clint Harrigan – the liner notes writer for Thrillington and  also the Paul McCartney and Wings’ Wild Life album.

The first person to reveal the identity of Clint Harrigan was John Lennon, who stated as much during a well-publicised letter feud with McCartney in the New Musical Express in 1972.

All this makes the new eBay appearance (in April 2021) of an Abbey Road acetate all the more interesting for fans. P. Thrillington himself keeps a Twitter account, which is worth following.

“I did one of my favorite little tricks, which was to use a pseudonym. Me and Linda sat around and we invented this character called Percy Thrillington.” – Sir Paul McCartney

“So we invented it all, Linda and I, and we went around southern Ireland and found a guy in a field, a young farmer, and asked if he minded doing some photographic modelling for us. We wanted to find someone that no one could possibly trace, paid him the going rate, and photographed him in a field, wearing a sweater and then wearing an evening suit. But he never quite looked Percy Thrillington enough.”

The picture from the McCartney website, below, is a little-known Linda classic. 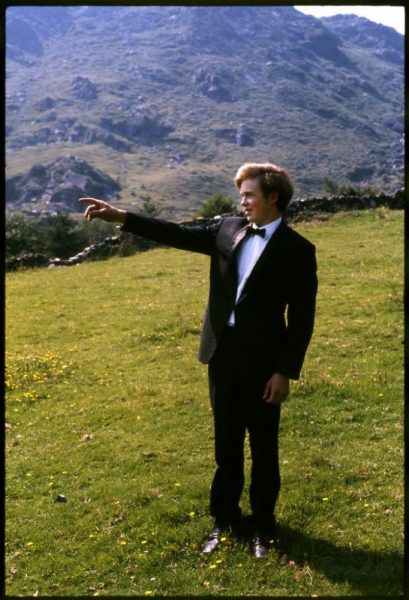 For the record’s release, Paul and Linda booked classified advertisements in the back section of British newspapers, making cryptic announcements such as “Percy Thrillington wishes to announce that, comforted by his specialist’s verdict regarding his condition, he has departed, all smiles, for Yorkshire.”

Percy’s business cards were scattered around London, while radio and poster campaigns also tried to build a mystique. Percy flopped.

“I was hoping to remain anonymous. I always like people not to know what I’m doing. That’s why I find the whole social networking a bit weird. I think it’s something to do with having been Beatles famous. […] For years I denied any responsibility and authorship because then, for me, I just had something on people – it was a good feeling. I’d just say, ‘I’m sorry. I have no idea who this person is or why he has covered my album’. I basically enjoy lying! ” 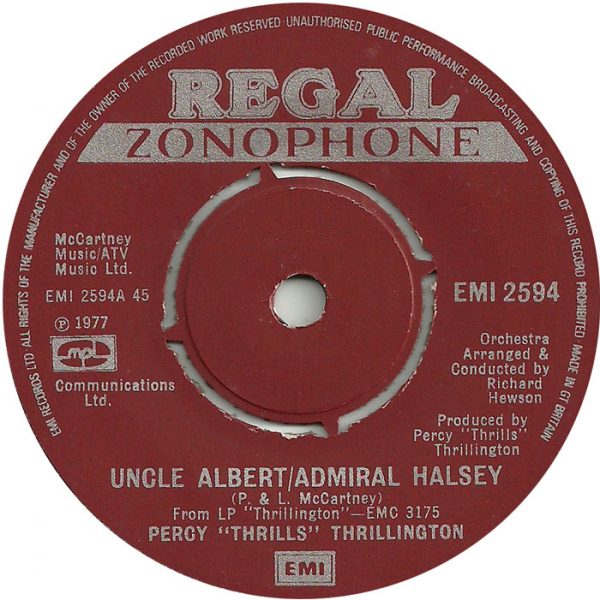 At the appointed hour in 1977, Percy ‘Thrills’ Thrillington (or rather, his publicist, supervised by Paul and Linda) sent out handpicked roses to selected London media to celebrate the release. Clint Harrigan’s biography tells us that “Percy ‘Thrills’ Thrillington was born in Coventry Cathedral in 1939. As a young man, his travels took him to Baton Rouge, U.S.A. where he studied music for five years on the trot. Moving later to Los Angeles, he gained expertise in the marketing, conducting and arranging fields. Eventually the path led to London…”

Among the intended targets for Percy’s romantic gesture were: Julie Burchill of the NME (possibly deleted, see below). Jilly Cooper and Anne Nightingale, and Caroline Coon were certainly on the Thrillington list, managed by Tony Brainsby Publicity. The originals are held on a Belgian fan website.

April 2021 will be a thrilling month for Beatles’ collectors with this McCartney rarity and oddity. 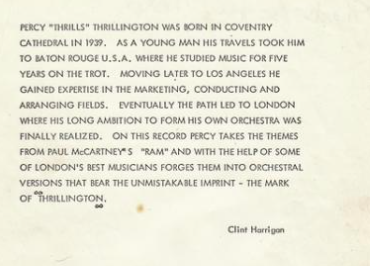 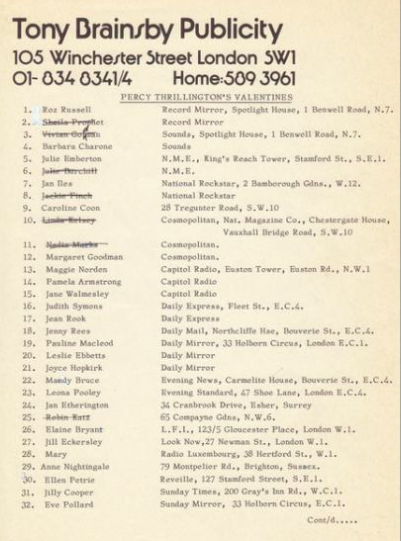