Yoko, John, Cards and Horoscopes
John Lennon’s interest in astrology is still there to see on the roof of his psychedelic Rolls-Royce – and a personal account from his and Yoko’s New York Tarot reader, John Green (aka Charlie Swan) whose autobiography, Dakota Days is now a collectors’ item. With the passing of Phil Spector and the arrival of a huge new archive of Plastic Ono Band audio and video, in 2021 – interest in the Lennon-Ono output of the late Sixties onwards is back. So – what part did horoscopes and Tarot cards play in their lives? Or the iChing and astrology?

I Don’t Believe In I-Ching, Tarot…
The lyrics to God famously list all the things John Lennon did not believe in at the time. (Source: Twitter/Tim’s Listening Party/John Lennon). 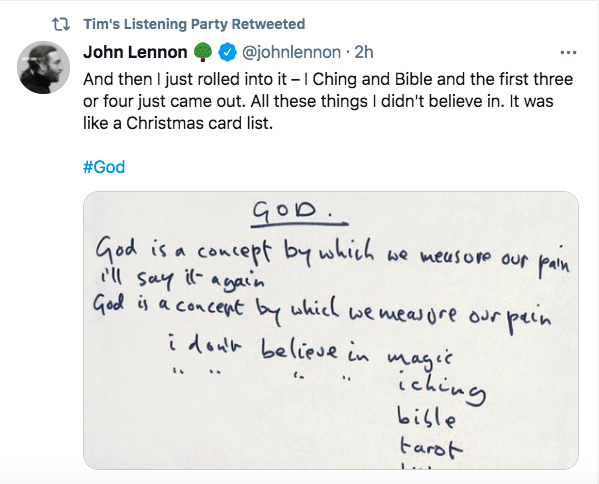 Firing The Beatles’ Astrologer
John Lennon’s cynicism heard in God at the time – may have partly come from this incident, reported in The Daily Telegraph 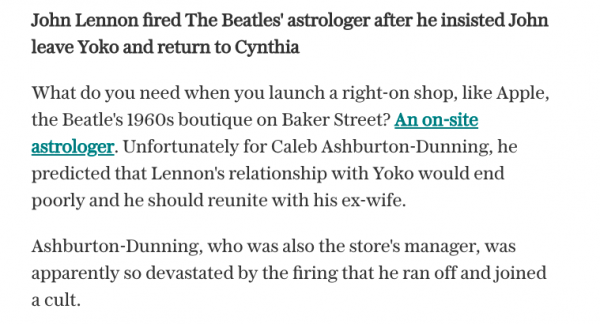 Caleb Ashburton-Dunning and Apple
Lennon’s attitude towards astrologers, palm readers, the psychic world, the Tarot and I-Ching varied throughout his life. The Apple Boutique psychic, though, with his cards and coins, obviously did not take Lennon or The Beatles where they needed to be.  Beatles’ employee Tony Bramwell picks up the story in his autobiography Magical Mystery Tour.

Yoko – Born on the Cusp
In March 1969 in NOVA magazine, Lennon and Yoko told Irma Kurtz about their birth charts. “Yoko was born in 1933 and half a world away from Liverpool. She is a cusp between Aquarius and Pisces and has an astrological temperament, she assured me, quite suitable for John’s Libra.”

Later on, astrologer Patric Walker, who wrote for NOVA under the pen-name Novalis, would shape Lennon’s ideas about astrology. Right up until he passed to spirit, John Lennon was interested in horoscopes. So was Yoko, and his last major interview at Playboy put journalist David Sheff, through his paces. The Ono-Lennon household was interested in not only his astrology, but also his numerology, as it turned out. The account appears in Sheff’s book, All We Are Saying.

Yoko, Horoscopes and Numerology
“Yoko was on the telephone when I entered, but she nodded and signalled for me to sit down on the couch near her. I sat up straight, sizing her up. She seemed, as I had anticipated, severe. We chatted – New York, the weather, the plane flight. She darted to the next topic. Besides my astrological sign,  she had read my numbers. Based on them both, she concluded, “This is a very important time for you. This interview will mean more than you can comprehend now.”

Yoko was right. The young David Sheff had also passed the test. He remembers, “One of Yoko’s assistants called to ask for the time and place of my birth. The interview apparently depended on Yoko’s interpretation of my horoscope, just as many of the Lennons’ business decisions were reportedly guided by the stars. I could imagine explaining to my Playboy editor, “Sorry, but my moon is in Scorpio – the interview’s off.” It was clearly out of my hands. I supplied the information: December 23rd, 3.00pm, Boston.”

Lennon is said to have owned a copy of Cheiro’s Book of Numbers and been interested in numerology.

Lennon  was certainly familiar enough with Patric Walker (called a friend, here) to have attracted this comment from the astrologer, on 20th February 1980, in The Australian Women’s Weekly. 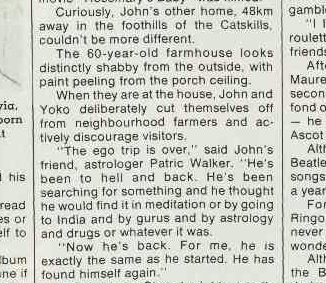 Cynthia and the Psychics
Cynthia Lennon remembers, in her autobiography, that John also attracted letters from psychics offering advice. One of them told John he would be shot, in America. 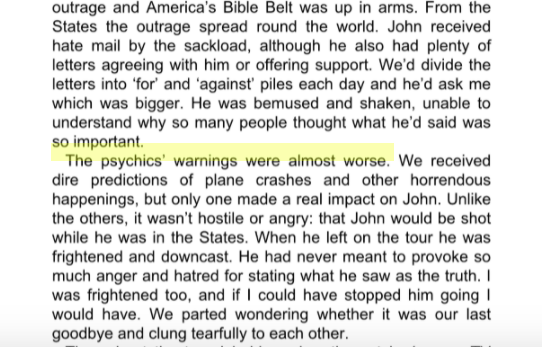 Lennon, Astrology and Paul
Astrology turned up again in Sheff’s conversation with Lennon about Paul McCartney, for Playboy. John commented, “If you notice, in the early days the majority of singles – in the movies and everything – were mine. And then only when I became self-conscious and inhibited, and maybe the astrology wasn’t right, did Paul start dominating the group a little too much for my liking.”

The Rolls Royce With the Astrological Roof
Yoko Ono, interviewed by Irma Kurtz, was right on trend for 1969, the year that Linda Goodman released her book, Sun Signs – but the Lennon-Ono interest in mysticism would go far deeper than horoscope columns in pop culture.

John Green (Charlie Swan) and Lennon
Real name John Green, Charlie Swan (as he became known only to John and Yoko) was an Oracle (the O) to the couple in New York. Beyond his account of his employment in Dakota Days, Green’s account was also picked up by biographer Robert Rosen. 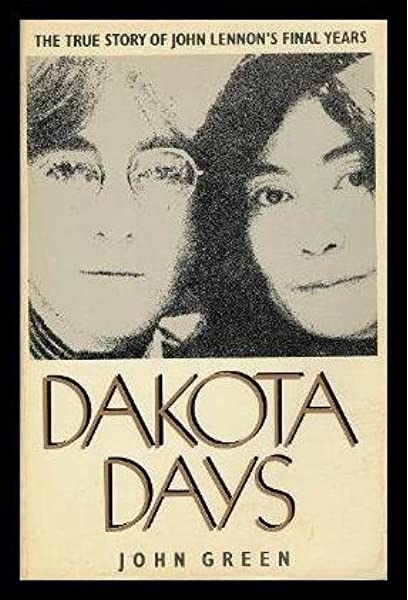 The Cards According to Swan
Biographer Robert Rosen makes a long and controversial claim for Swan/Green’s influence in the couple’s lives, in his book, Nowhere Man: The Final Days of John Lennon.

A fascinating account of the real John Green  can also be found here, here by his one-time pupil in Tarot, Jean Campbell

In 1967 John Lennon’s 1964 Rolls-Royce Phantom V was driven by his chauffeur Les Anthony to Brian Epstein’s home for a party. The stars were aligned.

“It was sprayed all yellow first,” said Anthony, “then hand-painted” with ordinary latex house paint in elaborate Romany designs and astrological symbols.’

Writing in What Do Astrologers Believe? Campion states “John told Elliot that he was born at 6.30pm on 9th October 1940. On other occasions he gave different times of birth, but this time was confirmed by his aunt, Mimi, who brought him up.”

“WE’D ALL LOVE TO SEE THE PLAN…Next came our “revolutionary period” which blossomed shortly after we landed in the States for a visit. We never intended to live here permanently (although an English astrologer, Patrick Walker, had foretold that I would leave England for good a year earlier). I had no intention of leaving home, for tax or any other reasons. It just happened that way.”

The Palm-Reading in Greece and Lennon’s Death

Greek film-maker Nico Mastorakis (right) was profiled by The Times when he revealed Lennon had been warned he would die on an island, by a local palm-reader, on the Ono-Lennon trip to Athens in 1969.

Yoko Ono and the 1969 Palm Reading
John Lennon references the Athens prediction (above) in a YouTube clip here. Nico Mastorakis had taken the couple to various Greek astrologers and psychics during their holiday, and a short film (auctioned at Bonham’s) survives. Here, at around 12 minutes, 40 seconds, Mastorakis reminds Ono that the palmist had warned the couple about Lennon’s death on an island, with the result being that they flew back to London immediately, cancelling a visit to Donovan. As Yoko realises in the clip, the island would prove to be Manhattan, many years later. The prediction, made in November 1969, is often mistakenly called an astrology forecast online, perhaps because Patric Walker was also a resident of Greece and one of Lennon’s favourite stargazers. What the unknown psychic in Athens saw, though, was in the lines of Lennon’s hand.

John’s Last Word
The last word belongs to John Lennon in the biography by Jonathan Cott. According to the extract, below, it’s likely that  either Patric Walker or Roger

Elliott told him (in England) he would leave the country. As we now know, a Greek palmist told him he would die on an island. For Lennon, as Cott recounts in Days That I’ll Remember: John Lennon and Yoko Ono, fate ended up being about forks in the road. “Is there always a fork in the road and are there two preordained paths that are equally preordained?” These are some of John’s last recorded words: 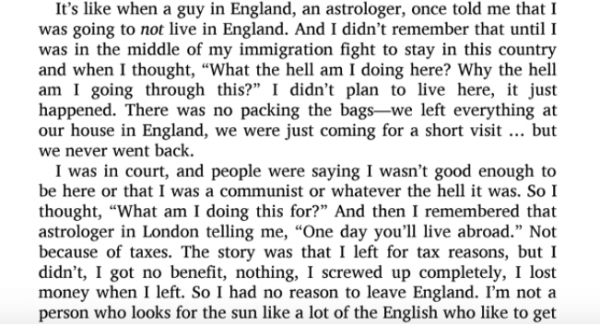 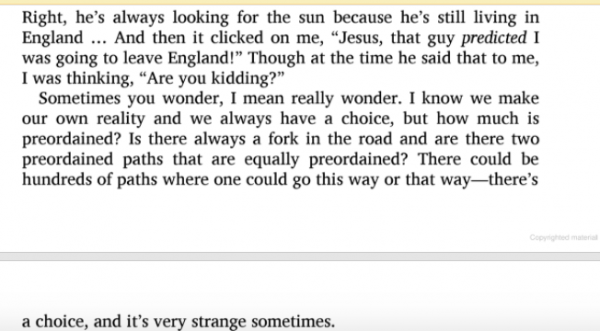 One Reply to “Lennon, Astrology and Psychics”