A stunning cinema, referenced in the original lyrics to John Lennon’s song, In My Life, as giving him “happy hours”, and near the birth place of bandmate George Harrison  ( born directly opposite the building) has been saved from demolition, by the LIDL supermarket chain. 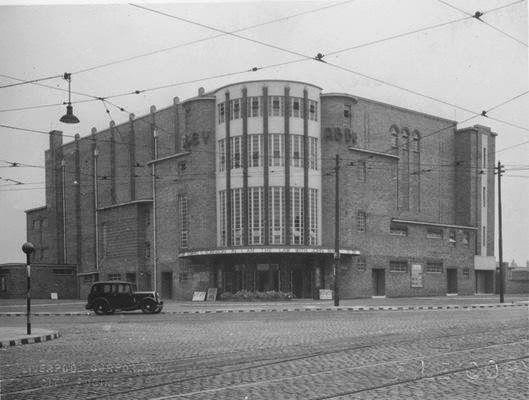 Following a 7000-strong petition, Historic England, the public body which protects old buildings, has now officially recommended the landmark site for listing at Grade II level, which means it cannot be demolished.

John Lennon, The Abbey Cinema – In My Life

In 1965, when John Lennon started composing ‘In My Life’, his original lyrics contained the verse:

Penny Lane is one I’m missing, up Church Road to the clock tower, in the circle of the Abbey, I have seen some happy hours.

Find out more about the original lyrics and the cinema circle, at Beatles’ Liverpool Locations.

The Coffee House, probably Wavertree’s oldest surviving pub, is nearby and it was here that John Lennon’s mother Julia worked here in mid 1945. John was left in the care of his grandfather at Newcastle Road, a short walk down Church Road from the pub.

With a new April 2021 heritage listing that puts an almost-priceless value on Beatles’ history, it’s timely that letters from the band’s Hamburg years have just been listed at auction. In previous years, Bonham’s have even sold John Lennon’s typed expenses.

Some of the Hamburg  items were sent by the band to photographer Astrid Kirchherr, who was engaged to former Beatle Stuart Sutcliffe after meeting them in Hamburg.

Her photographs are widely shared today on Twitter, partly as a result of the publication of her stunning photograph collections. A few of these images are highlighted  here.

Astrid recently passed away, remembered by Sir Paul McCartney on his Twitter account. The Bonham’s auction is just one side of 2021 valuations of the band, though. You can still find a rare book with Astrid’s signature on eBay; a tribute to the art of Stuart Sutcliffe.