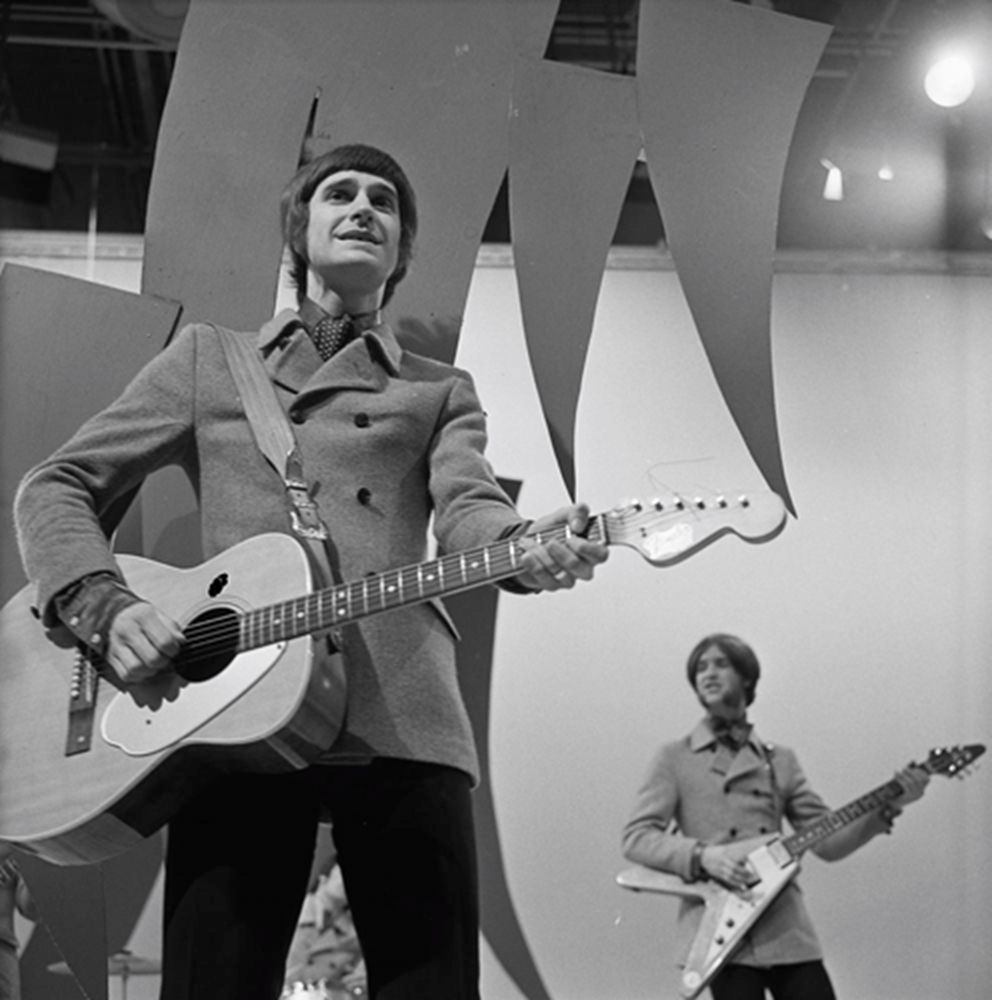 Strolling in the footsteps of Sir Ray Davies means – starting at his childhood home with Dave Davies – and ending up at Alexandra Palace.  Or back at the real Village Green. Or Konk Studios.

Along the way you can find a favourite pub (of Davies and Graham Chapman) and what Dave Davies calls his ‘village green.’

The Sir Ray Davies Stroll is best experienced with headphones and your favourite albums, like The Kinks Are The Village Green Preservation Society (November 1968).

You can also see a plaque honouring Pete Quaife, or at least stroll past the walls outside the school where he’s honoured. Quaife, seen here, playing memorably on a clip for Picture Book was given an ovation at Glastonbury when remembered by Ray Davies – and Kinks fans.

Wander in any direction or skip a few, but make sure you have some time to stop and peruse Charles Dickens on a park bench (Davies’ favourite author) or watch the excellent documentary on Sir Ray Davies, directed by Julien Temple, in interview with Alan Yentob.

This Kinks pilgrimage takes you from Ray and Dave Davies’ old family home at 6 Denmark Terrace, Fortis Green, in a suitably kinked circle taking in Hornsey Town Hall, The Broadway, Crouch End – where on 16th February 1963, ‘The Ray Davis Quartette’ made its debut.

You will also visit the shop where Ray’s first guitar came from – and find the special place in Hampstead where two of his heroes visited, or stayed.

There is an excellent film from 1959 showing the streets of Fortis Green, Muswell Hill and Hornsey as Ray Davies and brother Dave would have known them, when young, to view on the way.

Below, a clip from the unveiling of the Pete Quaife plaque at Fortismere School.

William Blake, a hero of Davies, was a regular visitor to Wyldes Farm and Charles Dickens, another favourite, lived here in 1837.

Talking to The Times, Davies named Great Expectations as his favourite novel. “A timeless story that could well apply to today. All the characters could exist in the modern world. I’ve related to many of them from time to time. When I was a youngster I related to Pip, at one time I related to the escaped convict, but now I’m older my sentiments are drifting towards Miss Havisham (and believe me, I know how Miss Havisham feels).”

Davies, who can quote Jerusalem by heart ( “And did these feet in ancient times walk upon England’s green and pleasant land) grew up with the hymn. ” I sang it in school. But also, when I found out more about him, he was a real Londoner, he was a Cockney; he left London once, I believe, and he wrote Jerusalem while he was out.”

“When I first did the Electric Proms, for some reason I remembered William Blake living in North London for awhile—he lived in Lambeth, but he lived in all parts of London. He stayed in Highgate for a while, near to where I live. And they say that he believed he could talk to the angels on Hampstead Heath if he sat in a tree. So he’s kind of eccentric, to say the least.”

” In 20th Century Man I sang about what has become of the green pleasant fields of Jerusalem. I’m a bit of a fan of him. He was wacky, slightly oddball, considered to be mad, even today.”

“You know William Blake used to live here, too? He used to talk to angels out on Peckham Rye. I’ve talked to a few myself at night on a pub strut…”

If you want to try some alternative walks in the area, these are recommended by Kinks fans.

The Kinks: On A Sunny Afternoon

Welcome to Konk. Where not only the Kinks, but also Elvis Costello, Blur and Franz Ferdinand have recorded.

According to an interview in The Evening Standard, Konk is where Sir Ray would most like to live.

“It was always my ambition to live in a small theatre, to play concerts and put on plays and not have to leave the house. In many respects I can do that at Konk studios, where I record and have an art gallery.”

“The real Village Green is a combination of north London places: the little green near my childhood home in Fortis Green, Cherry Tree Wood, Highgate Woods. That little green is where we played football, and where we stayed ’til it was dark. There was mystery there; it was where we heard stories. But the Village Green could be anywhere. It’s all in my head, probably. The record’s about lost childhood, but also being a kid. Everybody’s got their own Village Green, somewhere you go to, when the world gets too much.”

Speaking to Rolling Stone, Dave Davies admitted, you’d have to go to nearby Cherry Tree Wood for “an actual green”).

The album is venerated by Graham Coxon from Blur, among others. Blur also fill in some gaps on the map, as they’ve recorded at Konk.

Is Cherry Tree Wood the key to the Village Green Preservation Society? You can also join the dots again on the map to Konk Studios, where a pile of tapes resulted in one of the expanded Village Green’s most striking discoveries: rough reel-to-reel demos made in Ray’s former home at 87 Fortis Green, a stone’s throw from the more modest terrace where he and brother Dave were born, which is where you started your stroll. 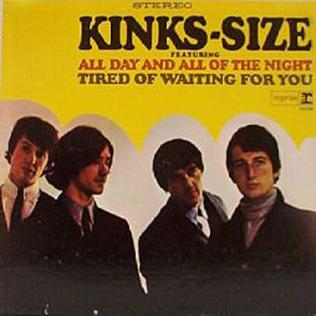 Record Collector: Though The Village Green is a symbolic refuge, it also has literal sources. Ray once listed to this writer all the woods and parks around his old neighbourhood of Fortis Green which comprised his childhood, suburban backyard; the small green near the Davies home nowadays used as an archery range, and Coldfall, Highgate and Cherry Tree Woods. The Village Green was “a combination” of these places but could also be “anywhere”, largely existing “in my head”.

“Those are important places,” Dave Davies agrees. “They form part of the feeling and imagery of what this record is. I always imagine it as somewhere local, with local characters. I think Cherry Tree Wood was closest to our version of The Village Green. I used to play cricket and football there when I was 12.”

You have 5.3 hectares to walk around at Cherry Tree Wood. But Waterloo Sunset was not written here,  nor at Waterloo Bridge – it was penned at 87 Fortis Green.

(Waterloo Bridge was near St. Thomas’s Hospital when Ray had a tracheotomy aged 13 and nurses would wheel him out on the balcony to look at the river.) 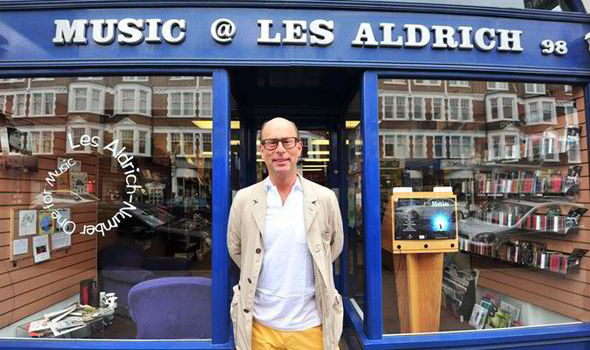 Speaking to The Express in an exclusive feature (above) Davies was asked about a favourite shop. It turns out to be the end point for many Kinks’ fans’ piligrimages: Les Aldrich, with a suitably proud new owner outside.

Davies: “I frequent as many independent record shops as I can in order to keep them open, particularly the Muswell Hill record shop Les Aldrich.”

Davies to the BBC: “I’d have to say the Palace, Alexandra Palace, is an interesting building. I can see it from our studio [Konk Studios] and the view from there represents every aspect of my journey from childhood through life, from the house I grew up in to where I got married to the asylum I went to (laughs). You can see it all from Ally Pally.”

The Angel Inn and Graham Chapman 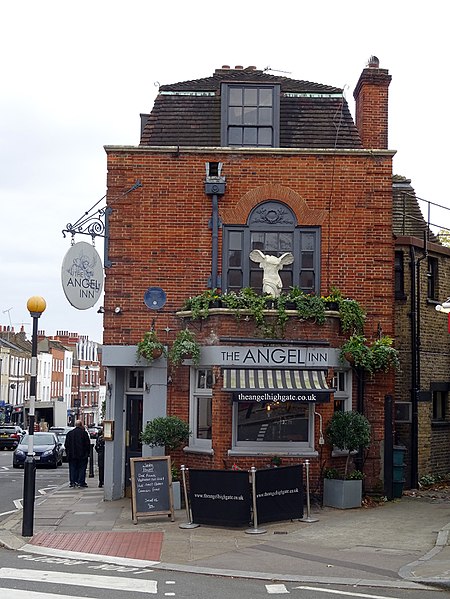 Sir Ray Davies:  “There was a time and I’m going back a few years now when I’d hang out at the Angel pub in Highgate with chums like the writer and comedian Graham Chapman [of Monty Python fame]. The Angel’s heyday was in the late Seventies and we’d all meet there, until Graham said one day, “I’m bored with this place. Why don’t you open a drinking club at your studio?”

So I did, and it became one of the most legendary drinking clubs in north London, full of actors and secondhand car spivs. But it got hard to stop the blurring between proper recording studio and drinking den, and in the end I think we volunteered to have it closed down (laughs).”

The documentary about the life and times of Sir Ray Davies begins at the old Hornsey Town Hall and is worth watching as you rest between map points.

Davies tells Alan Yentob in the documentary:  “We played here before we were The Kinks – it was close to where we lived and it’s really the origins of where I came from.

“I remember the stage and my family being in the audience somewhere…It’s decayed but there’s still something magnificent about it – there’s something in the walls that will go when it’s clean and shiny…It’s amazing – you don’t appreciate things until they’re gone.”

If you are looking for a Kinks room – go no further than The Clissold Arms.  At William Grimshaw secondary, not far away, (now Fortismere School) Ray Davies discovered George Orwell and asked a classmate called Rod Stewart to help form a band. (Stewart was kicked out, according to The Daily Telegraph). 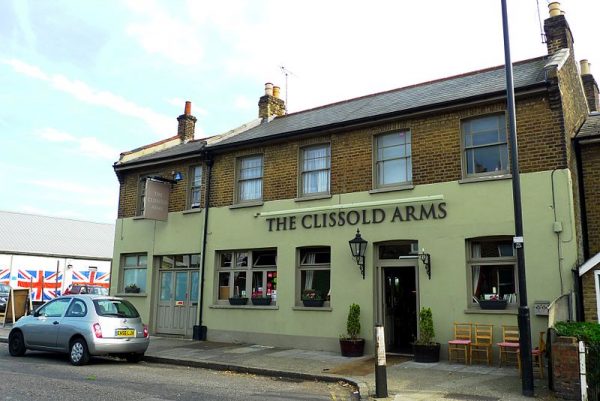 Adam Ant, Viv Albertine, Neville Brody, and Ray Davies.  This was the notorious Hornsey College of Art, involved in Sixties protests – but today is a primary school. You’ll find it on Crouch End Hill. Neville Brody went on to design The Face – the ultimate  Picture Book. So let’s end the Davies Stroll there. With Pete Quaife.