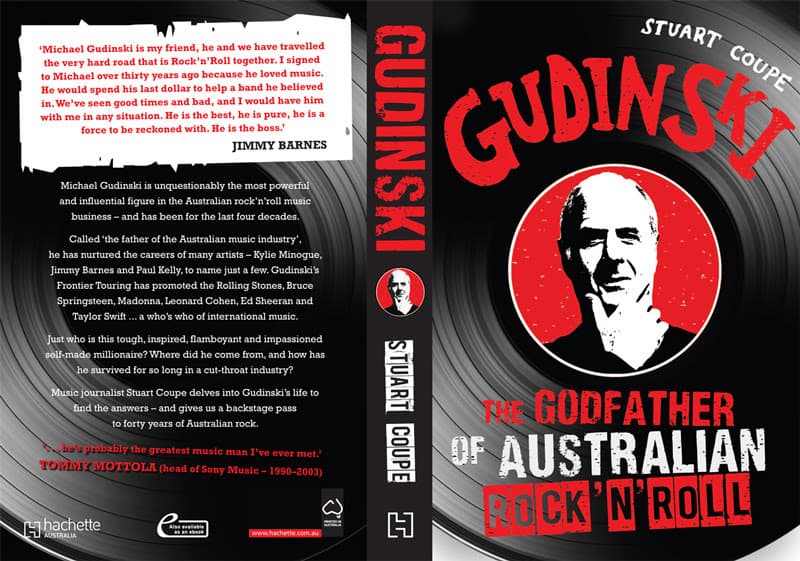 Michael Gudinski AM Knew Everybody

Michael Gudinski who very sadly and suddenly passed away in March 2021, had a huge life in music, from backing random Melbourne 1972 hippies at Sunbury (an Australian Glastonbury/Woodstock) to saving an Australian Rolling Stones’ tour.

His company Mushroom delivered a massive hit for the biggest band in indigenous Australian music history. Treaty by Yothu Yindi.

He interviewed Donovan and turned down Nick Cave.  He disliked Robert Forster wearing a dress to front the Go-Betweens (according to Forster).

Without Michael Gudinski AM there would be no Sunnyboys. No Triffids. He took the Wide Open Road to the music business in Australia but also fed the culture when nobody else was doing it.

His biographer Stuart Coupe told James Valentine – “He was a flag-waver for Australian music” in an interview.  And “He still uses the word ‘vibe’ 25 years after everybody uses it, but…”

The hustling, endlessly enthusiastic Gudinski and his colleagues at Mushroom shaped modern Australia. And it started at Sunbury –

In this excellent conversation between Stuart Coupe and James Valentine, they look at the idea that Gudinski was the loveable rogue businessman who saved the Rolling Stones tour of Australia

The Man Who Saved the Palais Balcony Collapse

Not being content to save the Stones’ tour, Gudinski was also happy to leap on stage to  save The Palais in St. Kilda from collapsing, during a Skyhooks balcony crisis.

From 1972-1973 and Hippie Australia, through the Skyhook’s last concert, at the end of the decade, through to Post-Punk/New Wave in the late 1970’s and 1980’s, Gudinski was behind most things in Australian musical culture that mattered.

Skyhooks and Gudinski – Living in the Seventies

Michael Gudinski tried to launch Skyhooks in the USA and Sports in the UK and neither worked out. It didn’t stop him. In fact, the bands that stayed and played in Australia just made the culture more concentrated.

For all that Skyhooks had the louche charisma of Red Symons and the brilliance of Shirley Strachan; the best lyrics and the most staggering sound – they were a Melbourne band singing about Melbourne. London and Los Angeles didn’t really get it. 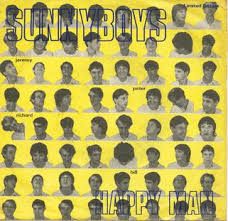 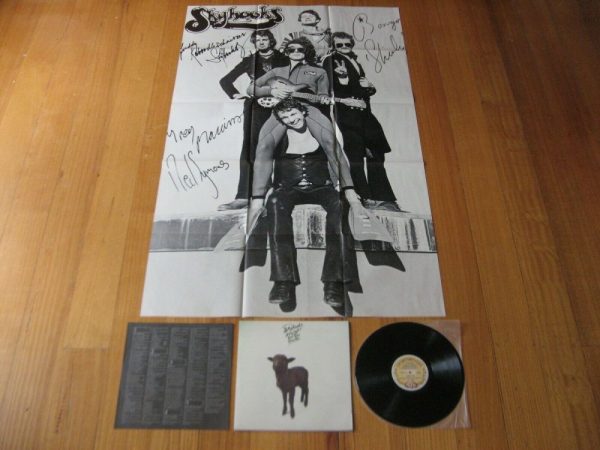 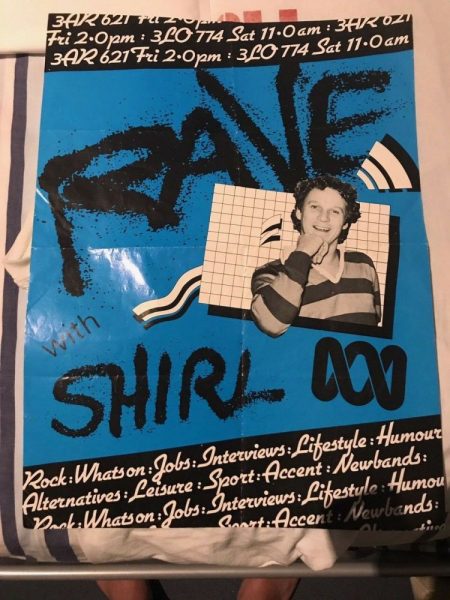 From Gudinski: The Godfather of Australian Rock’n’Roll.

“Gudinski never really understood punk rock. Still doesn’t. His is a world of blues-based rock’n’roll and pub rock. Punk was the antithesis of everything that he loved in music – with the possible exception that both exuded a certain rebellious attitude. But not having the faintest understanding or appreciation of what it was all about wouldn’t stand in the way of him trying to make a buck from the new trend in music.
But as things evolved and the audience grew, out came the opportunists. Finally it became obvious to even the most conservative figures in the local industry that it couldn’t be ignored. It was a flourishing, exciting world, with most key record releases being seven-inch 45rpm singles released either by the bands themselves or by small fly-by-night independent labels. Punk rock was changing the face of the Melbourne – and national – music scene. While much of it was right under Gudinski’s nose it took an old-school music hustler by the name of Barry (or Barrie) Earl to push him into exploring if there was a serious earn to be made.”

“In what can only be described as an ill-conceived attempt to cash in on the movement, Earl went to Gudinski and convinced him that they should form a subsidiary label under the Mushroom umbrella.
The basic idea was that Suicide would sign the cream of the punk/New Wave bands, with an emphasis (as usual with Mushroom ventures in those days) on Melbourne-based artists. And instead of making a big commitment to recording albums with each artist (mind you, they’d get those rights squared away in case they wanted to later), Earl and Gudinski along with other partners Philip Jacobsen and Ray Evans’s opening salvo would be a sampler album on white vinyl with a couple of tracks from each of the best bands they could cajole into signing with them.”

“Some bands, of course, wanted in to the Suicide activity and all the benefits that were promised to accompany the association. James Freud, Sean Kelly, Peter Kidd and Graham Schiavello, collectively known as The Spred, rehearsed for Punk Gunk like there was no tomorrow. Earl had put the word out he’d be there. In a tiny, putrid Clifton Hill flat they wrote and learnt gems like ‘I Didn’t Know I Loved You Till I Saw You on the Dole’.

Punk Gunk was held – literally – on the street, in Faraday Street, Carlton. The PA was set up on the footpath and the audience assembled on the road. The Boys Next Door headlined.”

From The Daily Review.

From the excellent Miles Ago:

“I can remember in 1970 (yes I am very, very old) when I was in a rock group in Australia, when I first met Michael Gudinski, then a 17 year old pimply spotted teenager who’d just dropped out of high school.

Gudinski wanted to enter the music business and he had already demonstrated the enterprising side of his character by organising alternative teenage dances in suburban Melbourne town halls. They were truly alternative because he was the only entrepreneur at that time who was willing to risk his money for blues concert featuring hard hitting alternative rock bands.

He used to book bands like Billy Thorpe and the Aztecs and Chain and Wendy Saddington – not too far a cry from Guns ‘n’Roses and a myriad of the world’s top rock performers that he has since booked for Australian concert halls.

In an effort to gain experience of being on the road with a rock band, the young naive Gudinski volunteered to be the Valentines’ roadie on one of our interstate tours to Adelaide.

He carried the equipment, drove us to the gig, fetched our drinks, and did all the humble things that a roadie used to do in those pioneering days of Australian rock. Even though he was only 17 at the time, the experience was seen as a step down in status for the budding dance promoter.

But he did it for the experience.”

The Go-Betweens and The Frock

For all that, Michael Gudinski is allegedly the man who tried to break up the Go-Betweens.

In the late 1980’s Robert Forster decided “that a band needed a frontman who could get them noticed. He took it upon himself to be the one getting noticed, trying a variety of tricks including dyeing his hair grey (“I want to look like Blake Carrington,” he told his hairdresser, referring to the silver-haired patriach of super soap Dynasty) and wearing dresses on stage (he notes this was long before it was made cool to do so by Kurt Cobain and Evan Dando in the ’90s).

“It was during this period that The Go-Betweens were signed to Michael Gudinski’s Mushroom label (through which they released the 16 Lovers Lane album) and went on the road in Australia as the support act to rising US indie stars REM.”

“Forster writes: “The dress had made one appearance after Perth, in Sydney.

“There Michael Gudinski took Grant aside after the show. ‘You run the group, right?’ ‘Yeah,’ said Grant. ‘Get rid of the guy in the dress.'”

The Triffids and Gudinski

“Strangely, though, the band that was seen internationally as capturing the Australian landscape and personality better than anyone else couldn’t get past the myopic radio and mainstream media back home as Robert McComb, older brother, violinist and guitarist recalls.”

“[Mushroom label boss] Michael Gudinski was as bemused as anyone,” McComb says. “After we came back from Europe the first time I remember meeting him and he said ‘What are you doing over there? Why can’t we break you here the same way?”‘

From The Sydney Morning Herald

The Sunnyboys – Alone With You

In September 1981 Michael Gudinski and Mushroom found The Sunnyboys, after Phantom. One of his legacies as businessman, is Alone With You. Another is Happy Man. A third is Love To Rule. A fourth is I Can’t Talk To You.

Jeremy Oxley,  Richard Burgman, Peter Oxley and Bil Bilson made their first album with Mushroom and the rest is battered cassette history. They hit 13 on the charts.

Red Symons and Michael Gudinski came to see a Split Enz gig and according to Tim Finn, wanted to sign them straight away, as he was always looking for “eccentric bands.” They were booed off stage but he signed them anyway – the same night. Gudinski’s colleagues at Mushroom dug in.

Sunbury in a Pandemic?

Maybe the last word should go (above) to Stephen Cummings. With Gudinski’s passing, though, there is already talk of a tribute concert.

Sunbury 21? Sunbury 22? Sunbury in a pandemic? Well maybe…Please leave your tributes in Comments. Thank you.