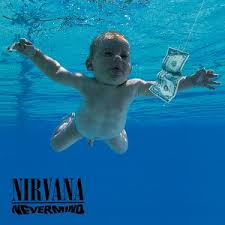 With the end of tours in 2021 comes the end of tour riders. Some of the most excessive food, drink and (other) requests in entertainment are no more. Tour Rider Nirvana, or Nirvana Tour Riders, are history.

This goes beyond backstage catering into rock archiving. Amy Winehouse, for example, and her 40 towels, are partly preserved by her tour rider from 5th December, 2006. You can read more at the fan website, Amy Winehouse Forever. 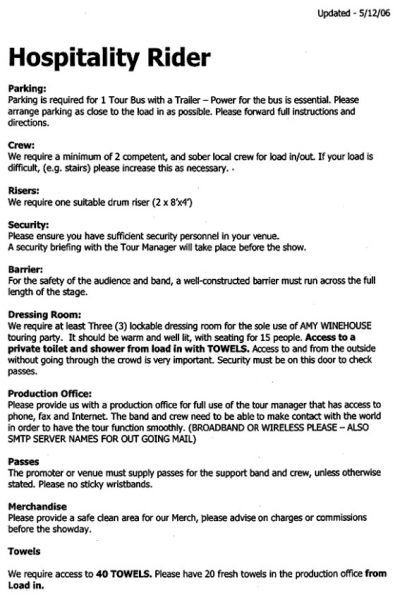 From Amy to Coldplay what roadies know about tour riders could fill a book. Which hasn’t happened yet.

Also in 2006 an Iggy And The Stooges tour rider asked for a Bob Hope impersonator to be on hand at every stop – which also gives its recipient the freedom to “ask the man in the wine shop” to help him choose among the “loads of good red wines”.

“You know what would be really nice? If you could make this room look less like a typical rock & roll dressing room and more sort of… Interesting? Are you with me? Just let someone loose with a little bit of flair… Er, do you know any homosexuals?”

“One monitor man who speaks English and is not afraid of death.”

“Seven dwarves, dressed up as those dwarves out of that marvelous Walt Disney film…”

Yes, you can try this at home.

Another rider excerpted here, covers Van Halen’s 2008 U.S. tour too. The Van Halen rider specified that a ‘study room’ be set up backstage for a musician and his tutor (in this case, bassist Wolfgang Van Halen, who was 16 when the tour launched).

And this: ‘Mr. Roth practices martial arts in his dressing room, and in order to do this there can be no rugs or carpeting of any sort.’

You can read more at The Smoking Gun, which is the best online source for tour rider archives.

This is a rare Dave Grohl interview describing a Tour Rider to Blender magazine in 1995. Goodbye, riders, 2021 will miss you.