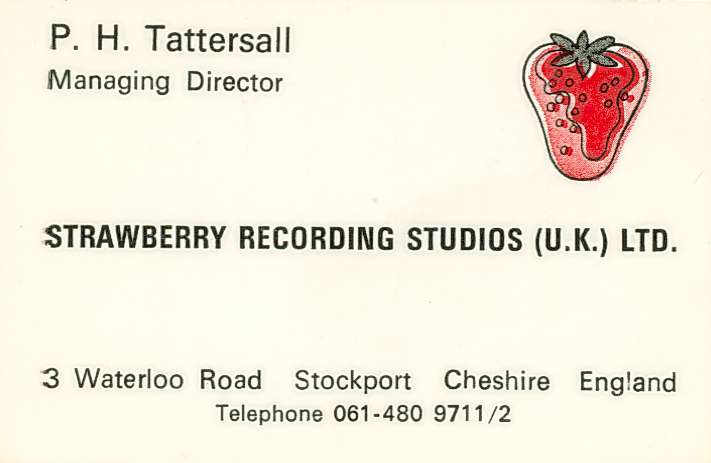 Beautiful parks surround Strawberry Studios, which Joy Division made famous – the subject of a recent book by Sounds photographer Paul Slattery. You are now in Joy Division Country. And The Buzzcocks. And Jimi Hendrix played here.

As you set off on your walk, spare a thought for the employee who put a 10CC tape in a cupboard at Strawberry Studios and forgot about it for a few decades (below, from @StrawberryNorth). In fact, the whole area is like the land that time, forgot. 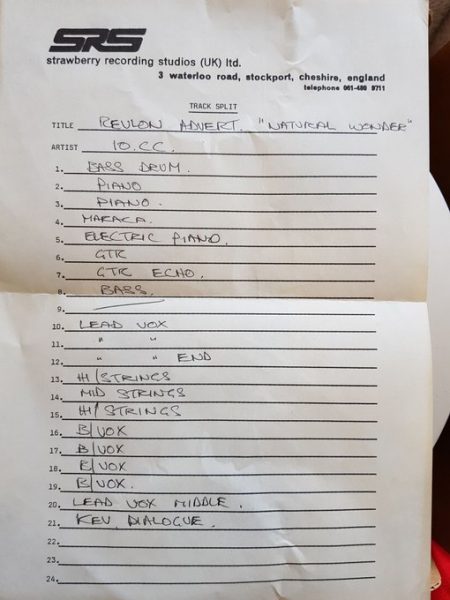 Strawberry Studios, at the beating heart of the Mersey, has more music history than the average museum. The Smiths recorded here. Joy Division recorded Love Will Tear Us Apart here. The studio was set up by 10CC but became a second home for Tony Wilson.

I’m Not In Love

The 1975 single I’m Not In Love uses multi-tracked vocals from Strawberry Studios. Eric Stewart took over the mixing desk and bandmates Gouldman, Godley and Creme sang  “aah” multiple times to build a wall of sound. The Strawberry Sound. Later on Joy Division produced a Manchester Sound. 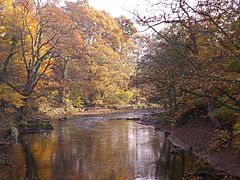 In April 1979, the facility at the Stockport studio hosted Joy Division and their producer Martin Hannett. Out came Unknown Pleasures.

At nearby Vernon Park, someone left a drum kit in the bandstand in tribute. 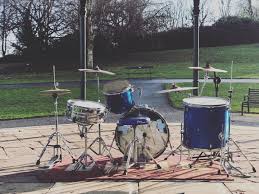 The Ghost of the Waterloo Pub

From the I Love Manchester website:
“I remember going to Strawberry to interview Terry Hall in 1984 when his band the Colourfield were recording there. We went to the Waterloo, almost directly over the road. Every recording studio needs a decent pub or two close by – somewhere for bored musicians to escape to, or to be interviewed in.”

The pub is no more but the studio is marked with a blue plaque. This photograph (@Pubs_of_Mcr, Paul Slattery) shows the now-closed Waterloo Hotel on Waterloo Road. Joy Division are nearby, recording at Strawberry Studios and the pub can be sighted over Steven Morris’s shoulder. 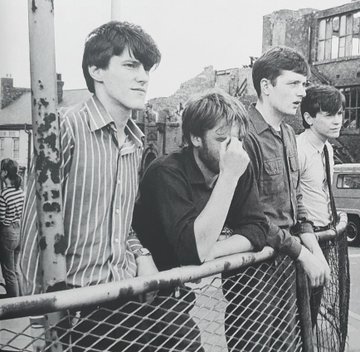 To honour Strawberry Studios as the home of classic recordings by Stone Roses, Sir Paul McCartney and The Smiths, on 3rd May 2007 a plaque was mounted on the front of 3 Waterloo Road.

Historian Peter Wadsworth is Stockport born and bred, has a PhD on the history of Strawberry Studios, and curated the Strawberry exhibition at Stockport Museum. He also has the story of 10CC’s lost 1970s recordings. 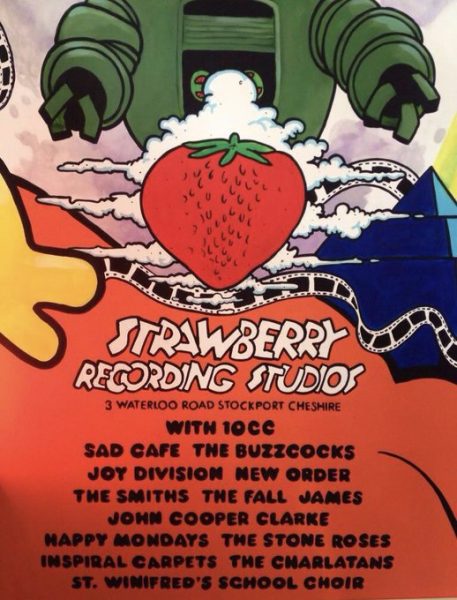 As you wander around the area, think about that long-lost 10cc track mentioned earlier, written for a Revlon advertisement, lay in a cupboard for 44 years. The band had absolutely no recollection of it.

Pauline Murray (Penetration, The Invisible Girls) has better recollection of her time in Stockport @PaulineMurrayX. 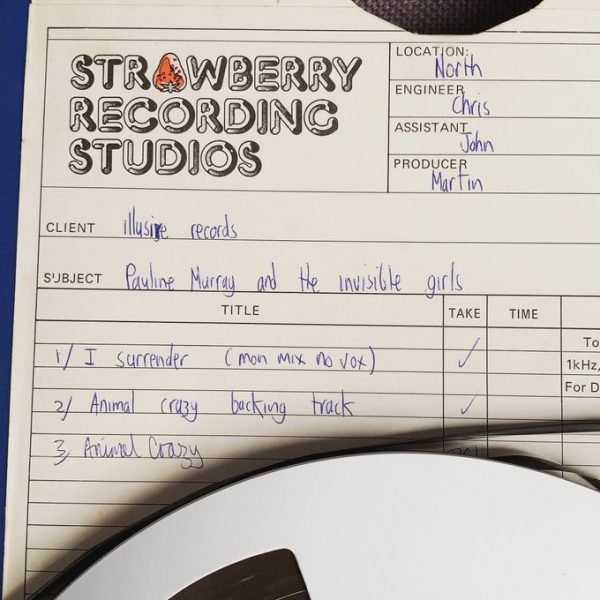 Stone Roses and Happy Mondays
Producer Martin Hannett made the studios his own until 1991, producing Joy Division, Durutti Column, Pauline Murray, and  Stone Roses, and mixing OMD, A Certain Ratio and the Happy Mondays.

The Fall also played nearby at Stockport Town Hall. 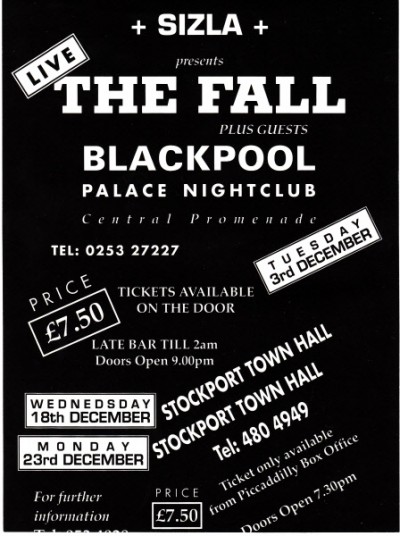 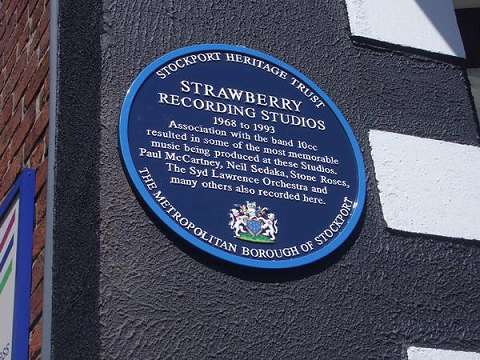 The official tour is here

Claire Robinson
“When I was a child growing up near Stockport, Strawberry was at the height of its fame and influence.  My Grandparents lived around the corner and we would be in awe of the Strawberry mystique when my Dad’s car had to wait at the traffic lights outside.  Every time we bought a record – every kid in Stockport flipped it over on the way home on the bus to read the small print to see where it had been recorded – an affliction I still have today.  Often the answer was Strawberry.” 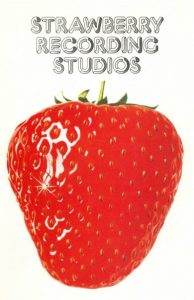 Brian Epstein’s Staffer
The studios were set up in 1967 by Peter Tattersall, previously a staffer for Brian Epstein.  He approached local musicians Eric Stewart of The Mindbenders and songwriter Graham Gouldman, who had penned hits for The Yardbirds, The Hollies and Herman’s Hermits, to invest .

They were joined by art students Lol Creme and Kevin Godley.  These four would go on to become the band 10cc. The name Strawberry, was chosen by Eric Stewart in response to the Beatles’ Apple. Ironically Sir Paul McCartney would end up at Strawberry, later.

Strawberry: the Stockport studio where The Stone Roses, Paul McCartney, 10cc, and The Smiths recorded

In Tony Wilson’s ‘novelisation’ of the Factory Records film 24 Hour Party People, he hymns Strawberry as “a major world-class thirty-six track studio that was in Stockport – Stockport ladies and gentleman, Stockport, because 10cc were a Manchester band and they had taken the proceeds of the delicious I’m Not In Love and had reinvested in their home. Reinvested. Built a fuck-off studio. Respect.”

Sir Paul McCartney’s brother, musician Mike McGear, recorded here with The Scaffold (the album Sold Out) in 1975. The group had some affectionate words for Stockport on the sleeve notes.

They wrote: ‘A nice town Stockport. It’s no Liverpool, but it’s A-OK. The band 10cc have studios there, on a hill, near the station and nearer a pub.”

‘Good old Stockport. Thy ‘eart beats strong and thou hart more than ‘atmakers.’

Jimi Hendrix at The Tabernacle Club

Over the road from Strawberry Studios is the original site of The Tabernacle Club. A ticket signed by Jimi Hendrix there is now a rare collectable.

The Tabernacle Club, on the corner of Middle Hillgate and Waterloo Road, was a 1967 historic hub before disappearing. The gig list for 1967 includes: The Small Faces on Friday 27th January. The Jimi Hendrix Experience on Sunday March 26th. Pink Floyd on Friday 28th April. The Easybeats on Friday 21st July. (Source: Manchesterbeat.com). 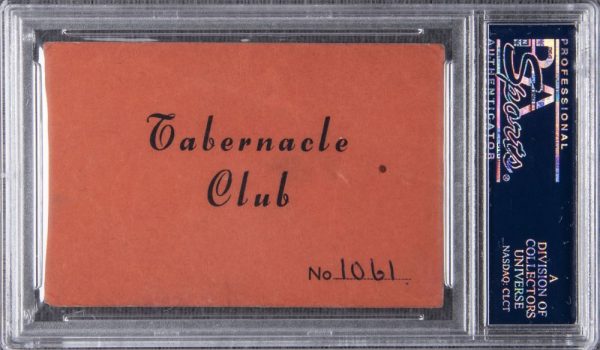 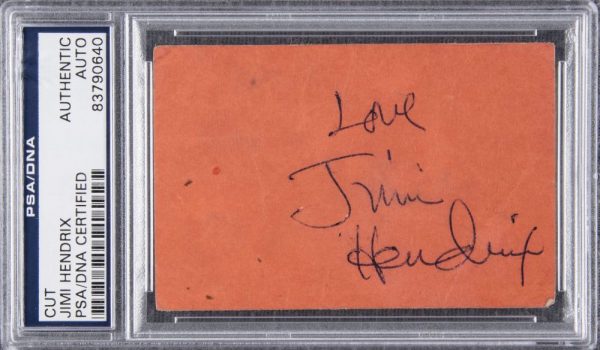 On your walk around the River Goyt at Woodbank Park and onto Strawberry, time-travel back to  Saturday 28th July 1979. This was when Paul Slattery took the photographs of Joy Division that would. become a book. You can buy it here.

Something for the car. Or the bandstand at Vernon Park. In this podcast, Paul Slattery talks to Lee McFadden about the iconic photo session with Joy Division outside Strawberry Studios in Stockport. He also talks about his partnership with music journalist Dave McCullough for Sounds magazine and the work done by the Stockport Museum in preserving the legacy of Strawberry Studios.

Lee: How was the session arranged?

Paul: I was working for “Sounds” magazine at the time, doing a lot of photos with a journalist called Dave McCullough – who was a really hot, fantastic writer from Ireland. Dave had come over a couple of years earlier and we hooked up because we liked each other – and liked the same kind of music and politics and everything. A few weeks previous (to the session) he’d got this tape from this band called Joy Division. He’d been playing it in the “Sounds” office in Covent Garden and a lot of journalists had been complaining that he’d been playing it far too loud – and it sounded a bit dirgy!

Lee: Was this the “Unknown Pleasures” album?

Paul: Exactly. Dave had the (pre-release) tape of it – and so later we drove up there because Dave wanted to interview the band and we were going to see them at the “Stuff The Superstars” festival at Manchester’s Mayflower later on that evening.

Lee: So this was the first time you met Joy Division?

Paul: That’s right. We wended our way through the industrial streets of Stockport – ended up at Strawberry Sound Studios. There we met the band.

Lee: Were you present at their recording session that day?

Paul: We weren’t, no. When we got there they were kind of waiting for us – I think – and playing pool. We found out who Ian was and Ian dragged the rest of them out of the studio, and after what seemed like an age we managed to coax them outside down to the Waterloo pub.

From his 2015 autobiography:
“We made the album at Strawberry Studios in Stockport, which was owned by 10CC. I’d never seen a studio like it in my life; it was packed with all sorts of gear, way over spec for a band like us. There we were, a bunch of 21-year-old punks, looking around at racks and racks of state-of-the-art gear and wondering what all the flashing lights were for. I loved it. I’d look around in awe, thinking that you could make a record with all this, never mind the guitars.”

“Mad as it might sound now, it took us just three weekends to record Unknown Pleasures: one weekend to record the basic tracks, another to record overdubs and the third to mix it. There was no synth player making cat noises, but some of the overdubs were quite whacky, such as Martin recording smashing glass and the sound of the building’s lift shaft.”

The Buzzcocks at Strawberry Studios 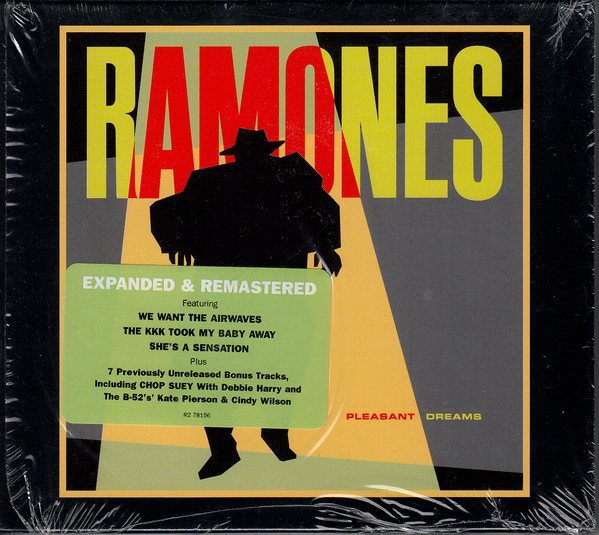 Hand in Glove – Walking Through History

On February 27th 1983, The Smiths recorded Hand in Glove at Strawberry Studios. Create your own playlist for this walk around Stockport.