A Mother and Son Reunion

Like everyone else, when the world’s entertainment industry was obliged to shut down because of COVID-19, Suzi Quatro found all her tour plans shelved – and so did those of her son, Richard Tuckey, who would have been heading out on the road with his own band. So she suggested they get together and maybe cut another record together. 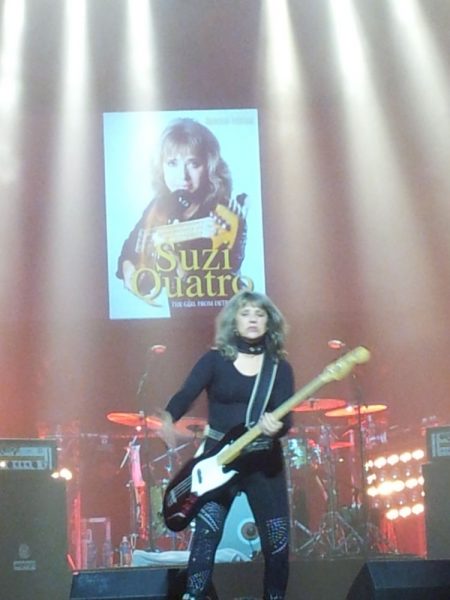 The son of Quatro’s first husband, guitarist Len Tuckey, Richard had always admired the energy leaping off his parents’ early albums and so a few years ago suggested he and his mum have a shot at working together. A guitarist himself, it took a few shots before he came up with something mum felt was strong enough to work on, but once he presented a tune titled Don’t Do Me Wrong it was like a dam bursting and in March 2019 she released No Control, the first Suzi Quatro album since 1982’s Main Attraction on which the name Tuckey sat next to hers in the songwriting credits. At the time Richard was working as the guitar tech for Chelmsford, Essex singer-songwriter Jordan Cardy AKA Rat Boy.

Suzi Quatro’s first #1 hit single was a cover of a song titled Rolling Stone, though it was only #1 in Portugal! Invited to London by record producer Mickie Most, the pint-sized American bass player arrived without a band so he sent her into the studio with (then) session musicians, guitarist Peter Frampton and drummer Alan White. We all know what happened to Frampton while prog fans will know White, who’d been playing in John Lennon’s Plastic Ono Band, was soon to replace Bill Bruford in Yes.

Released on Most’s RAK Records in July 1972, Quatro wrote the B-side, Brain Confusion (For All the Lonely People). Of course it’s her third single, Can the Can, released at the end of April the following year, which put Suzi Quatro atop the international pop charts. Once again, she provided the B-side, Ain’t Ya Somethin’ Honey.

“Mickie never knew how to produce me,” she admitted to me before her 2017 Australian tour. “He believed in me – he thought I was a star from the time he set eyes on me, but he didn’t know what to do with me in the studio, and it took Mike to see it, after I formed my band and we started doing gigs. This is before I started having hits. We were doing all original material and it was rock’n’roll and it was boogie-based, and Mike came along to a gig and all of a sudden Can the Can was written.”

The Mike of the piece was expat Australian Mike Chapman, who’d left for London in the mid-‘60s to try his luck. He joined a psychedelic band called Tangerine Peel and over four year from 1967 cut nine singles before they fell apart. “I realised there was something about the actual writing of the songs and producing the records that I enjoyed more than the insecurity of trying to be a rock star,” he explained to me. “I didn’t look like a rock star anyway!” Then he met an Englishman named Nicky Chinn… but that’s a story for another day.

“The best album in my career to date!”

That’s how Quatro sees her second album collaboration with her son Richard, The Devil in Me, and once again, he’s brought out his mother’s blues, R&B and even jazz roots. While there are plenty of classic Suzi Quatro rockers on display, delivered with her impeccable pop sensibilities, as a coproducer, Tuckey has got Quatro to really open things up across the dozen songs on The Devil in Me. “Richard wanted this album to have a through line,” Quatro tells us in the press release that’s gone out about it all, “so that you could put any track on, and it just fit … He also said he wanted this album to be as important and ground-breaking as my first one. So that is how we approached this project, and that is what we accomplished.”

There’s an extensive European tour booked to promote the album that, COVID-willing, kicks off in Peterborough in the UK April 17. The Devil in Me will be released March 26 through SPV/Steamhammer as a CD DigiPak as well as a gatefold vinyl double-LP, which includes two bonus tracks (Go vinyl!)