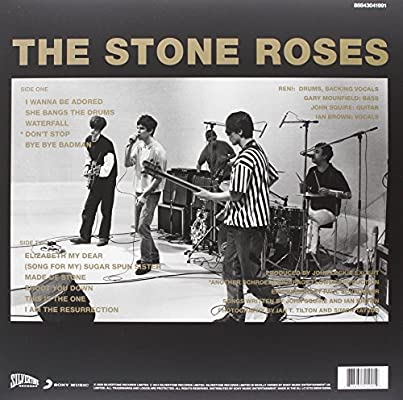 Backmasking and The Stone Roses

On 2nd May 1989 Don’t Stop appeared on The Stone Roses by The Stone Roses. The video is one of a collection on YouTube showing the band’s fondness for backmasking. It’s famously the song formerly known as Waterfall. 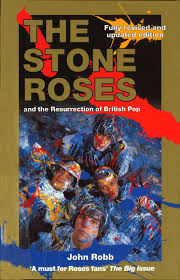 Waterfall heard backwards (the technical term for this is backmasking) gives us the classic Don’t Stop, which runs straight on from the original song, on the album.

Remarkably, though, Don’t Stop was actually performed by the band in the studio too. You can see it in rehearsal, here.

The Backwards-Looking Band
The Roses always looked backwards. Back to the 1970’s with Adidas tracksuit tops and the 1960’s with Mod haircuts and sideburns, and back to the 1950’s with Jackson Pollock inspired artwork and black-and-white television Northern accents. So their use of backmasking is in keeping.

The Stone Roses’ John Squire also looked backwards to paint his famous canvas, Bye Bye Badman which makes reference to the May 1968 riots in Paris.

John Squire said, “Ian Brown had met this French man when he was hitching around Europe, this bloke had been in the riots, and he told Ian how lemons had been used as an antidote to tear gas.” The lemons also appear on the artwork.

Elephant Stone, which has a backwards version on the B-Side of the 12″ single (titled Full Fathom Five) is another example of ‘Backwards Roses.’

Backmasking and the Roses
This is a fantastic website post on the subject of The Stone Roses and backmasking by Some Random Nerd.

The Beatles and Backmasking
Backmasking was popularised by the Beatles, who used backward instrumentation on their 1966 classic Revolver. In 1969, rumours of a backmasked message in the Beatles song “Revolution 9” sparked the Paul is dead urban legend.

Success Back to Front

Despite selling millions of albums and singles, The Stone Roses actually lived their career backwards, along with their most famously strange song, Don’t Stop. For two years, locked in dispute with their record company, not a single note was played.

Looking Back Again
They were then freed from what was deemed to be an unfair contract after spending a couple of years doing nothing (the band commented they should have got a paper round, or a job in a sweet shop). Then they went forwards again, having gone backwards.

The band made their debut on national British TV by performing Made of Stone on the BBC’s The Late Show in September 1989. That also ran backwards. A minute into the song, the power went out, prompting Ian Brown to walk off stage.

The first backmasking song came in 1959, when a group called The Eligibles released a record called Car Trouble, which contains gibberish which when reversed, they reveal the phrases “And you can get my daughter back by 10:30, you bum!” and “Now, look it here, cats, stop running these records backwards!”

The Beatles and the Roses
The backmasking on The Beatles’ Revolver includes Tomorrow Never Knows, I’m Only Sleeping and Rain. John Lennon claimed he was stoned when he played the tapes for Rain backwards by accident and enjoyed the sound so much, he and producer George Martin used it.

The Documentary – Made of Stone
Shane Meadows’ fantastic documentary on The Stone Roses is on YouTube.

Looking Backwards to 1990 Madchester
This American clip is now history. It’s also the first to raise the Sixties influence on the Nineties music wave known as Madchester, booted along by the nostalgic Stone Roses.