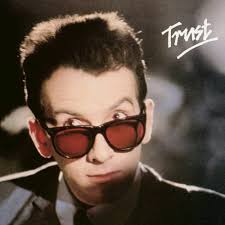 Inspiration for your next Elvis Costello playlist might as well come from the man himself, from his 2005 European tour.

The setlist (for sale on eBay) shows the songs and the guitars – including his favourite Telecaster – handwritten in black felt-tip pen.

The eBay seller wants US $1550 and has the photographs to prove he met Costello. If that is over budget, though, you can at least add these classics to your playlist.

Beyond Belief from Imperial Bedroom (July 2nd 1982). Beatles’ engineer Geoff Emerick produced and the exceptional drumming is as usual, by Pete Thomas. An alternative, earlier version, The Land of Give and Take shows the parallel universe release – and it’s just as good. One more for your Elvis Costello Set List Playlist.

This Year’s Girl from This Year’s Model (17th March, 1978). Costello explained in his 2016 book, Unfaithful Music & Disappearing Ink, that the song was “an answer song” to the Rolling Stones’ “Stupid Girl”. It is also the new theme song for The Deuce – Season Two (HBO) featuring Natalie Bergman.

This was also a 1988 demo by Sir Paul McCartney (solo) after he had written the original with Costello.

It appears on the album Mighty Like A Rose. The Costello version was released on May 10th 1991

The duet with Lucinda Williams, Wild Horses, takes Costello back to his enduring love for country music. And collaboration.

From Get Happy and released in February 1980, this song, in Costello’s own words – “Started out as a holier-than-thou snipe at a VERY FAMOUS ROCK STAR, who I imagined to be breathing his own artificial atmosphere. However by the time we came to record it I’d had a good lungful of the same poison, but had also located that slippery addictive feeling that you get just before giving in to something wicked. It proved to be the saving of the song, together with a few pints of beer and a riff borrowed from Booker T and the MG’s.” (From the liner notes for Girls, Girls, Girls 1989).

Alibi from the album When I Was Cruel was released on April 15th 2002. It was recorded at Windmill Lane Studios in Dublin.

All the Rage from the album Brutal Youth dates from March 8th 1994. The guitar chords are here. We’ll feature more Elvis Costello Set List Playlists as they appear.