Phil Spector – End of a Century

The Last Wall of Sound

Phil Spector, who passed away in January 2021, worked with The Ronettes, The Righteous Brothers, Ike and Tina Turner, The Beatles and John Lennon, and notoriously, The Ramones. He invented the “Wall of Sound” when instruments play identical parts in unison. He also invented his own notoriety and legend, eventually passing away in jail.

Phil Spector, The End and COVID-19

Spector was sentenced to 19 years in prison for murdering Lana Clarkson in 2009. He passed away in 2021 of complications from COVID-19 while he was serving his sentence in a prison hospital. He died two decades after the end of the century – one of his most famous albums, for The Ramones – having that title.

Phil Spector’s Back to Mono was included in Elvis Costello’s ‘500 Albums You Need’ in Vanity Fair magazine, 2000. 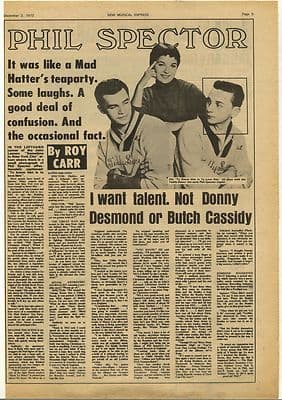 It says a lot about Phil Spector that a vintage rock magazine clipping about him is worth as much as a secondhand album in 2021. He is one of the most collectable producers in the world; even more so, after death. This clipping (above) is from 1972.

The Ramones and Phil Spector

Phil Spector remastered Rock’n’Roll High School for The Ramones here on the album End of the Century.

This is how the Ramones saw Spector’s overdubbing and echo chambers – and much more – during the infamous recording session for End of the Century. Yet, Spector’s effort was the highest charting Ramones album of all time, reaching 44 in the USA and 14 in the UK.

In the sessions for The Ramones’ End of the Century, Spector reportedly held the Ramones hostage at gunpoint. According to Dee Dee Ramone, when Spector took Joey away for a meeting, he found the producer warning the band away with a gun. “The next thing I knew Phil appeared at the top of the staircase, shouting and waving a pistol.”[13]

Buy End of the Century on Vinyl

You can buy Phil Spector’s/The Ramones’ End of the Century  on vinyl here.