Between 1978 and 1978, Low, Heroes and Lodger (The Berlin Trilogy) was recorded in one Berlin neighbourhood. 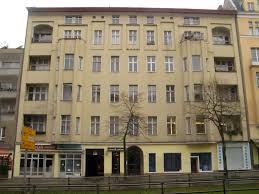 Walking tours of mapped music areas near to you, or around the world. This month – David Bowie in Berlin.

Between 1978 and 1978, Low, Heroes and Lodger (The Berlin Trilogy) was recorded in one Berlin neighbourhood.

Take a walk inside with Warren Huart and Alex Wende, Studio Manager around Studio Two, where Bowie’s Berlin Trilogy was recorded.

See this brief interview with David Bowie about Berlin and this neighbourhood citing Christopher Isherwood as a reason to move there – and his life with Iggy Pop. “We thought, if we can’t write in this place, we can’t write anywhere,” Bowie told his interviewer Avi Lewis.

This particular block of flats in Berlin-Schonenberg was was a low-rent area, where a “skint” Bowie lived and worked with Iggy Pop (though in separate apartments).

Elias Matt has produced a good, subtitled local guide here and even takes you up the stairs and into this sacred German space.

The “blue, blue, electric blue” room in Sound and Vision was painted by Bowie, here.

Rory MacLean, Assistant Director on Just A Gigolo, remembers, “His assistant Coco Schwab found him a modest, first floor apartment in an art nouveau building in the leafy Berlin area of Schöneberg.

Coco – the devoted, unsung heroine of Bowie’s career – had its walls painted white as a private gallery for his dark images. She ordered in blank canvases and tubes of oil paint. She read Nietzsche beside him, beneath the fluorescent portrait he painted of Japanese author Yukio Mishima. Above all, she went with him to the Brücke Museum, to gaze at the works of Kirchner, Kollwitz and Heckel. The expressionists’ rough, bold strokes and melancholic mood captured a sense of the ephemeral, as well as Bowie’s imagination.”

Rory MacLean’s Berlin: Imagine a City is published by Weidenfeld and Nicolson

Known by various names including Neues Ufer (New Shore) this was ‘Other Shore’ (the translation of Andere Ufer in Bowie’s day. It was one of Europe’s first gay bars. 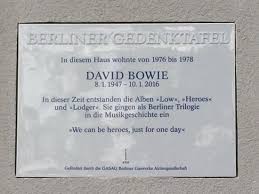 Bowie told Uncut, “155 Hauptstrasse, second floor…Knock hard because the bell sometimes doesn’t work. Ig eventually moved in with a bird next door.” Iggy’s girlfriend was diplomat’s daughter Esther Friedmann. Often they’d blast off in Esther’s Volkswagen into the flat, wooded lakeland around Berlin. Iggy loved the “rinky-dink villages full of strange old German people. We used to get lost. I like to go out and get lost and be in places made of wood, just to wash every shred of America off. Taking a walk was like taking a shower.”

Bowie enthuses about the growing sense of well-being which Berlin brought. “Some days the three of us would jump into the car and drive like crazy through East Germany and head down to the Black Forest, stopping off at any village that caught our eye. Just go for days at a time. Or we’d take all-afternoon lunches at the Wannsee on winter days. The place had a glass roof and was surrounded by trees and it still exuded an atmosphere of the long-gone Berlin of the ’20s.”

Bowie, Iggy and Coco shopped for caviar and chocolates at the Ka De We department store in West Berlin. At night, David says, they’d “hang with the intellectuals and beats at the Exile restaurant in Kreuzberg. In the back they had this smoky room with a billiard table, sort of like another living room, except the company was always changing.”

David Bowie remembers Berlin: “I can’t express the feeling of freedom I felt there”

Getting to Bowie’s Apartment

If you are local, take a subway to Kleistpark U-Bahn. This is the subway station closest to Haupstrasse 155 and, from there, you will walk less than a block to where he used to live.

If you’re actually in Berlin, take a guided tour here.