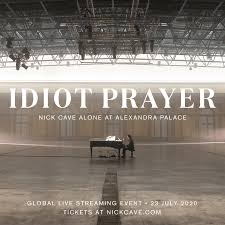 How do musicians keep playing and fans keep paying in 2020 and beyond? Nick Cave and Tex Perkins are experimenting with great results.

Nick Cave’s global livestream at Alexandra Palace was an unusually isolated (not just socially isolated) performance, which you can see part of here.

So what are the new gigs like? Inclusive (there is no capacity limit), affordable (tickets are, well, cheap) and … they disappear at the end, just like a real performance.

You can fill your glass as often as you like, with whatever you like, smoke inside the venue if you want (which happens to be your home) and…sit down. So this isn’t what anyone knows, but in 2020 and beyond, Cave and Perkins are creating something which we’ll all make up as we go along.

Tex Perkins In the Shed

Daniel Johnson in Brisbane, who hosts the podcast Artist to Fan, interviewed Tex Perkins about his online venture, The Show in August 2020.

The Show is basically filmed (real time/live) musical performances from Tex’s shed in Northern New South Wales. (Although it happens to be a shed decked out with a bar). Together with his wife Kristyna, Tex is inventing from necessity, but it works.

Dubbed ‘Entertainment in Isolation’ you can catch an early episode on YouTube below. Wearing a face-mask, helping himself to a Martini under the chandeliers, Perkins fully embraces Corona Rock. In fact he and Slick Productions may be creating it.

Calling himself a survivor, having lasted since the cassette, vinyl and CD years – “and now we’re in the era when nobody likes to pay for music” – Tex has seen it all. He’s also creating something that feels like a weirdly spaced night at the bar.

The Show feels warm, personal and inclusive and although it’s not a gig as we know it, it’s a gig. In fact, it’s barefoot, this being surf side country New South Wales. With Iceland surf footage running on a backdrop behind the musicians in psychedelic surf group Headland, it’s part shed, part home cinema. In fact it’s a five-camera set-up with a director.

Smoke Machines in the Shed

One show episode in the shed welcomes Les Dorahy on accordion and mandolin, Murray Paterson on guitars, Melissa Hunt on double bass.

Perkins told The Sydney Morning Herald, “Making it is stressful! We’re working to a deadline, we’re paying people for their time – except for my kids, they’re the clapboard operators and smoke machine button pushers. But I’m involved in everything from the creation to the promotion.”

$15 gets you into his shed to see The Show. So if you weren’t lucky enough to see Tex belting out The Honeymoon is Over, dedicated to the Australian Prime Minister (with a finger) on New Year’s Eve, maybe it’s time to get into the shed.

The Honeymoon is Over

Daniel recorded this interview with Tex Perkins on Zoom and it’s on Spotify.  Listen to the interview here.

Tickets for The Show with Tex Perkins are available now.