Home » Goth at the BBC

Goth at the BBC

A Forest, performed in the key of A minor, with a 4/4 drum pattern and famous flanging (two signals mixed together with delay) was produced by Mike Hedges who also worked on Boys Don’t Cry and Charlotte Sometimes.

Goth at the BBC

The Cure – Where It All Started

So where did Robert Smith’s Goth instincts come from? A dark place in 1980. Born from punk via New Wave, The Cure were heading for Gothdom three years after the Sex Pistols, even if they didn’t know it.

This is the official video for A Forest which was released as a single on 8th April 1980. It came from the album Seventeen Seconds. This clip was first shown on Top of the Pops on 24th April 1980.

The Cure on A Forest

A Forest, performed in the key of A minor, with a 4/4 drum pattern and famous flanging (two signals mixed together with delay) was produced by Mike Hedges who also worked on Boys Don’t Cry and Charlotte Sometimes. Hedges owned the Abbey Road Studios recording console used for Dark Side of the Moon (Pink Floyd) which sold at auction for $1.8 million in 2017.

Mike Hedges – Until then a tea boy, tape-op and assistant at Morgan Studios in Willesden, North London, had jumped at the opportunity to work with The Cure – originally Smith, Dempsey and Tolhurst — when other in-house staff declined the offer.

“Indeed, the fact that many of his elders considered punk both destructive and beneath them paved the way for Mike Hedges to carve out his own niche by way of a musical form that truly inspired him.”

Mike Hedges: “I basically collected every single flanger and chorus I could find anywhere in the studio and borrowed them from people with new units, and for A Forest, I think we had as many as seven flangers running on ‘envelope’, flanging on the shape of the sound coming in rather than as a constant.”

“Among the last songs to be recorded for the album was A Forest which, according to Hedges, he and Smith knew was going to be the most difficult. “We wanted it to be quite ornate,” he says, “and it ended up being the most produced track on the album. To me it always sounded like a single.”

The rest of this  interview from 2004 is at the Sound on Sound website.

Born on 21st April 1959 in Blackpool, Lancashire, the tenor vocal Robert Smith’s first group was Crawley Goat Band, with hippie Richard Smith, Janet Smith (his siblings) and friends. The next band with Cure drummer Lol Tolhurst would be The Obelisk. Following that, Smith played in Malice, then Easy Cure. Tracks included Foxy Lady by Jimi Hendrix.

“When we started, and were playing in pubs, I wasn’t the singer … I was the drunk rhythm guitarist who wrote all these weird songs. We went through about five different singers – they were fucking useless, basically. I always ended up thinking, ‘I could do better than this.’ … I mean, I hated my voice, but I didn’t hate it more than I hated everyone else’s voice … So I thought, ‘If I can get away with that, I can be the singer.’ I’ve worked on that basis ever since.” 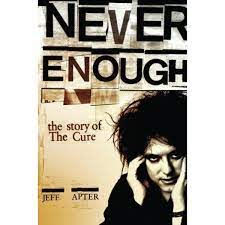 In Never Enough by Jeff Apter (Omnibus Press, London, 2009) Robert Smith confirms his first guitar arrived in 1972 as a Christmas present. Sold by Woolworths as The Top 20, it saw him into punk.

Lol Tolhurst was given an instruction book on drumming and a pair of drumsticks from his brother, Alanvale College sociology teacher Roger Tolhurst, upon his emigration to Tasmania when Lol was just 13 years old.

At St. Wilfrid’s Comprehensive School (where Robert Smith was once suspended), Lol Tolhurst remembers being told by one teacher, “Tolhurst, I know your brother: what are you going to be – a first-class student or a bee in my bonnet?”

Tolhurst’s autobiography is the best book on The Cure.

“We dressed in old mohair jumpers and jumble-sale trousers and walking down the streets in Crawley, people would always say things to us. And then sooner or later, someone would come out and try to take a pop. At one of our first proper gigs in Soho, we had a lot of skinheads there who had assumed something entirely wrong about us from the title of Killing an Arab. We were expecting them to lay into us but then the biggest guy, with a tattooed eagle on his chest, decided he loved us and after that, we were fine. Even at that age, Robert was able to make people feel somehow included.”

A Forest was on the set list in the basement of the Clyde Quay School, 27  Elizabeth Street, Mount Victoria, Wellington, New Zealand on August 3rd 1981. The Cure joined The Neoterics and journalist David Maclennan as reported by Stuff.

All Along The Watchtower by Jimi Hendrix (Isle of Wight Festival)

THE CURE – THE MULTIMEDIA EXPERIENCE

Robert Smith: “Hendrix was the first person I had come across who seemed completely free, and when you’re nine or ten, your life is entirely dominated by adults. So he represented this thing that I wanted to be. Hendrix was the first person who made me think that it might be good to be a singer and a guitarist – before that I wanted to be a footballer.”

When Robert was eight years old in 1967, his brother Richard Smith played him Purple Haze by Jimi Hendrix and then, in 1969, Five Leaves Left by Nick Drake. He told Rolling Stone (Australia):

“Nick Drake’s on the other side of the coin to Jimi Hendrix. He was very quiet and withdrawn … I think also that because he had an untimely death like Jimi Hendrix, he was never able to compromise his early work. He was never able to put a foot wrong. It’s a morbid romanticism, but there is something attractive about that.”

It was not long afterwards that Robert Smith attended his first rock concert – Jimi Hendrix at the Isle of Wight Festival. Smith was 11 years old.

A Forest at Morgan Studios

A Forest was completed at Morgan Sound Studios, 169-171 High Road, Willesden, London on February 10th 1980. This was the studio which gave birth to Pinball Wizard (The Who), Lola (The Kinks), Primary (The Cure), Charlotte Sometimes (The Cure), Jumping Someone Else’s Train (The Cure) and News of the World (The Jam).

Thumbs Up, Thumbs Down

The video for A Forest shows Robert Smith’s bandaged left thumb – he had broken it changing a tyre, a few days before the shoot. The famous clip was produced by David G. Hillier whose credits include The Cure: Staring at the Sea, Play For Today, The Cure: Greatest Hits – and Teletubbies.

On 8th April 1980 Saturn at 21 Virgo was in opposition to Mercury at 21 Pisces, an astrological transit not possible for 29 years. And Saturn-Mercury is Goth.