On May 18th 2020 Joy Division’s Ian Curtis has been gone for 40 years. The band’s most famous song, Love Will Tear Us Apart, has been remastered

On May 18th 2020 Joy Division’s Ian Curtis has been gone for 40 years. The band’s most famous song, Love Will Tear Us Apart, has been remastered with Peter Saville’s original art work. 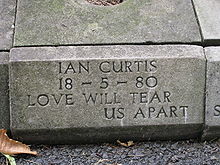 On the anniversary of Ian’s passing, fans gathered online for the YouTube Premiere of a Peter Hook and the Light Concert – So This Is Permanent

Ian Curtis did not usually play guitar, but was taught to play a D major chord by the band – and does so, on a Vox Phantom 6, in Love Will Tear Us Apart.

The sheet music is here 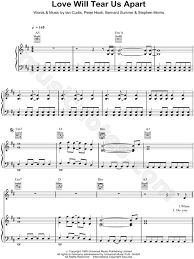 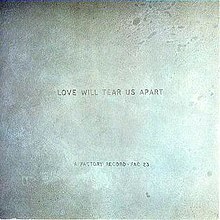 The famous stone angel on the cover is from the Cimitero Monumentale di Staglieno in Genoa, Italy, where Constance Wilde (wife of Oscar Wilde) is buried. 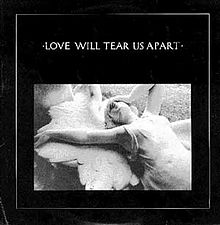 Both photographs were taken by Bernard Pierre Wolff in 1978.

The famous video was shot by the band themselves on 25th April 1980 in T.J. Davidson’s studio, where Joy Division rehearsed.

At the start of the video, the door that famously opens and shuts is carved with Ian Curtis’ name.

The song has inspired art work ranging from a Reign and Hail print on sale at John Lewis to a Damien Hirst in the National Galleries of Scotland.

Joy Division on Radio and Film

From Noel Gallagher to the Joy Division Bridge, this is a different take on a well-documented life.

Kevin Cummins was working on the NME as a photographer with Paul Morley in Manchester (and playing in a band with Morley) while Joy Division were starting out.

The first time Cummins saw them, they were called  Stiff Kittens, then the name changed to Warsaw. “And they weren’t very good, really” Cummins remembers with characteristic honesty.

Natalie Curtis, Ian’s daughter appears in this documentary along with members of Joy Division, author and broadcaster Stuart Maconie and Cummins, together with Paul Morley – just some of the intriguing voices on the film.