Mental as Anything Art

Mental as Anything Art

Mental as Anything first played at The Unicorn Hotel on Oxford Street, Sydney and went on to become one of the country’s best-loved, most critically acclaimed bands.

Guitarist Reg Mombassa (Chris O’Doherty) has become the most recognised artist in the band, although the Mentals have also been immortalised by Paul Worstead (1950) a graduate of East Sydney Technical College, where he studied alongside the Mentals . Both Mombassa and Worstead went on to design for Mambo as well as pursuing exhibitions in major Australian galleries. Mombassa’s Australiana is instantly recognisable, below, in a beachside pouch. 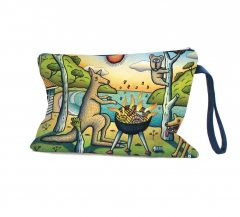 The vanilla slice poster advertising a gig by Mental as Anything at the Bexley North Hotel is one example and in 2017 the sale price was AUD$1950.

There were two series of posters produced by Paul Worstead to promote Mental as Anything’s Get Wet and Creatures of Leisure albums in the late 1970’s and early 1980’s. This Australian homage to Andy Warhol is now in the archives of the National Portrait Gallery of Australia. 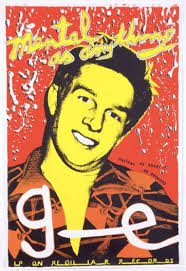 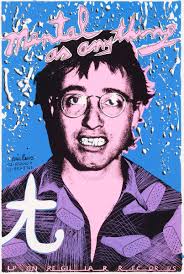 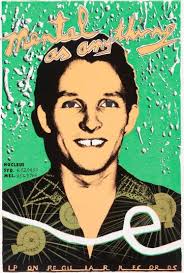 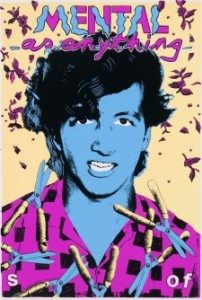 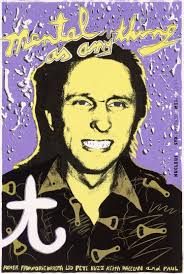 Speaking in the landmark ABC-TV series Long Way To The Top, Peter O’Doherty said of Mental As Anything,

“They didn’t do anything. Hung around drinking beer at each other’s houses. That’s where the band got its impetus from, all that time listening to records thinking ‘we can do that’. I don’t know where the art came in. Art came in on the t-shirts and album colours later on.”

His brother Reg Mombassa, aka Chris O’Doherty, remembers his family childhood elsewhere, “I drew all the time on little square blocks of butcher’s paper which is a sort of a thin grey paper that my mother bought, with an HB pencil.”

Peter: “As kids he was always drawing dismembered soldiers. That was one of his popular themes.” The idea of themes is important in the work of both brothers and the bands they played in and wrote for. Peter wrote Berserk Warriors, but it is Reg who is in the clip here, part of his general Viking obsession, which later revealed itself in his work for Mambo. The BBC Mental As Anything file is here

Peter was inspired by his childhood enthusiasm for Viking stories to write the satirical tribute to ABBA. ‘Berserk Warriors’, written by Peter and sung by Martin Plaza, was one of three singles to be released on Mental As Anything’s 1981 album, ‘Cats and Dogs’. Peter still performs the song with his brother, Reg Mombassa, in their band Dog Trumpet.

The Mentals in Australian Galleries

Beyond Vikings, Reg Mombassa’s nostalgic and patriotic landscapes and portraits, many inspired by his childhood in New Zealand, are characteristic of his work.

Mombassa’s archives can be found in the Art Gallery of New South Wales, the National Gallery of Australia and many more online. Patrick White, Elton John and Ewan McGregor  all  purchased his work.

Reg Mombassa’s life, art and work is captured on a number of YouTube videos.  Here are three, below.