The Saints donated a guitar to The Powerhouse Museum in Sydney. Private collectors pay a large amount of money for any instrument which has survived the 1960’s-1970’s. The great Australian guitar obsession probably began with Jimi Hendrix, seen here on the cover of a rare copy of Go-Set, ‘The Teen & Twenties Newspaper’ for music-mad Australians that inspired a whole generation of garage bands in the Sixties to go down to Brash’s music store with a fistful of cash. Since 1968 not much has changed.

The most famous Rowland S. Howard guitar is stored in the climate-controlled interior of Hamer Hall, Melbourne. Senior curator Carolyn Laffan and her team have many guitars in their care, including Rowland’s white Fender Jaguar.

His lifelong friend and collaborator Genevieve McGuckin (below, holding the Rowland S. Howard Lane sign at its St. Kilda launch), told the media –

“It followed him around his whole life. It was pawned a few times but it always managed to get back to him. I redeemed it a few times myself and so did others. It’s a hard life, being a musician.”

And “yes, that is his blood on the back”, she confirms.

Not every Australian guitarist becomes world famous, but in the local ‘who’s who’ of players  every bass (and its owner) still tells a story. Writer Scott Ellis remembers his Ibanez, here:

The first guitar I ever picked up was a bass.

It was 1980 and as usual, a mate and I were hiding in his room listening to The Jam or The Clash, blowing B&H Extra Mild cigarettes out of the window and discussing the deep issues of the day – like why Strontium Dog was cooler than Judge Dredd.

Then he picked up one of the ever-present guitars that his house always seemed to have (both his parents were art teachers) and started to play.

It was a three chord riff, nothing complex, but it needed, I was assured, something more.

So a bass was found, I was given about a minute of instruction (left hand here, hit that string there) and we were to my amazement, playing music. And like the first time I heard Joe Strummer play, I was hooked.

The next week I was looking to buy and there were two second-hand bass guitars I could afford, a Gibson Thunderbird and an Ibanez Roadstar. The Gibson had flatwound strings – I didn’t know what they were, but I knew they felt weird – so I bought the Ibanez and went home.

That bass has been dropped, thrown, caressed, thrashed. It’s been played with fingers, plectrums, coins, drumsticks, mikestands, bottles, fists, whatever worked to get a decent sound. 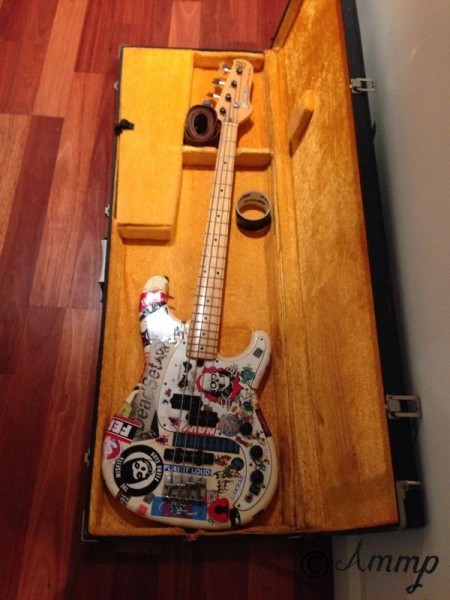 I was never that good – those first three chords are still my favourites – but my bass has become, after more than 30 years, an extension of my arms.

I can find any note without thinking, know which control to grab at what time and where to turn it to make whatever sound I want.

I know exactly how far it reaches if I need to butt someone off stage, how much weight I need to put into the swing to get all the strings to buzz when you belt it against an amp… and I know when I’m playing it, it doesn’t matter that I’m really just some guy who lucked onto stage; those moments are gold.

Even when I’m not playing it, just opening the case reminds me who I was, who I am and how I got from one place to the other. I haven’t played the bass for a while now; there’s an acoustic six-string that gets more attention, but it was the first guitar I ever owned and I’ll never sell it.

One day one of my kids might want to have a play. Or maybe I will.
And I’ll know where to find it.

Scott Ellis is an entertainment journalist for Fairfax Media who somehow, much to his amazement, managed to get two listings in The Who’s Who Of Australian Rock’N’Roll for playing in punk bands almost nobody has ever heard of. It still makes him laugh.