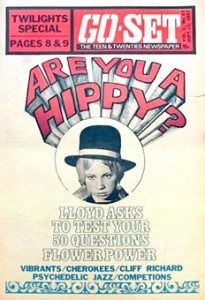 Before Countdown in Australia, there was Go-Set magazine in the 1960s, where Australian music, fashion and media exploded and would later evolve into Countdown culture – and eventually The Voice. The Real Thing in various incarnations  has survived from the 70s to today, throughout. Bill Armstrong was running his legendary Melbourne studios where Meldrum and Morris created their hippy anthem. This YouTube clip, below, tells Armstrong’s side of the story.

THE AUSTRALIAN HIPPY ANTHEM
The song be associated with Ian ‘Molly’ Meldrum who developed his taste in music during the hippy psychedelic era in Melbourne, while working at Go-Set. It was composed by Johnny Young, later known for hosting Young Talent Time.

RUSSELL MORRIS AND IAN MELDRUM
This is Ian (below)  and the earliest video we have of him, talking about the Australian music industry at an airport – his virtual home, in the early 1970’s.

This clip from the ABC-TV series GTK reveals Ian discussing Daddy Cool and The Mixtures in 1971 – when he worked as a manager, record producer and a Go-Set columnist writing what the interviewer calls a ‘stirring’ column.

‘Even my best friends, including myself, are rubbished in that column,’ Ian says. In this clip he also talks about his work on the Australian hit, The Real Thing, by Russell Morris: ’When I got back from London in 1968 I was ready to tackle something like Russell Morris and the Real Thing. I don’t think Russell and I were a good artist-manager team. We argued a lot. But I think that we both benefitted from it.’

THE SONG THAT EMI HATED

“I remember when we first started in Melbourne, Ian Meldrum said to me, “We’ll go and see Stan Rofe at 3AW.” Stan Rofe was a big star to me, he was on air and I’d heard him on the radio station and I said, “Well how are we going to do that?” and he said, “We’ll just go up to the radio station!”

“So we went up to the radio station and walked in and Stan came down and had a cup of tea with us. Ian said, “We’ve got this, what do you think?” and Stan said, ‘Love it, I’ll play it.’ And that’s what it was like.”

“I tell you what is ironic, The Real Thing was turned down as well. EMI hated it, they thought it was the biggest load of rubbish they’d ever heard.”

And on Molly: “He’s still my best mate but we’d had a couple of professional disagreements. He saw me as Australia’s Davey Jones from The Monkees or some such thing and I wanted to go in a different direction completely as a singer/songwriter so we differed on the way we were going and the record company was pressuring for another single, but I really would have loved to be with a  band like Chain.”

“But your fate is your fate. Whatever happens, those doors open and close for a reason and maybe if I’d started it earlier then it wouldn’t have worked.”

“I was happy doing The Real Thing, I quite liked psychedelia. I didn’t like pop a lot but I remember Ian (Molly Meldrum) had done a number of songs with me and we’d done ‘Only A Matter of Time‘ which I absolutely loathe, it was on the back of The Real Thing, and a couple of pop songs and I said to Ian, ‘This is rubbish, we’re not going in the direction I want to go,’

I said, ‘I’m not John Farnham, I’m not Ronnie Burns and I’m not Normie Rowe. I want to do something that they wouldn’t even contemplate thinking about doing. I want to go in that direction. Let’s go psychedelia, let’s go into something more band oriented than a pop single…Ian, to his credit, agreed and said, ‘You’re right, they’re not different enough.”

Later on, the arrival of colour television was  Countdown’s ticket to huge ratings. Russell Morris had five Australian Top 10 singles during the late 1960s and early 1970s and is in the ARIA Hall of Fame.

Buy The Very Best of Russell Morris on iTunes.

TEN FACTS ABOUT THE REAL THING

For more information, see Tomorrow Is Today: Australia in the Psychedelic Era, Edited by Iain McIntyre. Purchase at Amazon.

The original jingle The Real Thing was recorded for radio by The Fortunes in the USA in 1969.

Filmed by BSharpProductions and uploaded to YouTube. This gig took place on September 8th 2007 when Midnight Oil played at the Backroom in Byron Bay. Peter Garrett dedicates the song to “all the Australian musicians, writers and poets.”

Buy The Real Thing by Midnight Oil at their website.

This is the most powerful modern incarnation of the song yet (at least since Kylie’s own version) from the Voice YouTube channel in July 2014. Here Kylie, the judges and the top sixteen contestants take Johnny Young’s composition and give it electrifying ensemble cast treatment.  Will the song be back in a new incarnation beyond 2020? The Real Thing is  one of the few Australian songs which has been revived from the Seventies through to the 21st century. Watch this space.