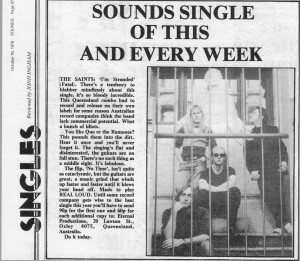 The Saints are to be honoured in a $60,000 mural on the north side of Upper Roma Street in Brisbane, near the band’s Petrie Terrace share house and rehearsal space, nicknamed Club 76.  Rented by Ivor Hay, the original Saints’ house stood opposite the local police station. Ed Kuepper supplied the iconic red graffiti. 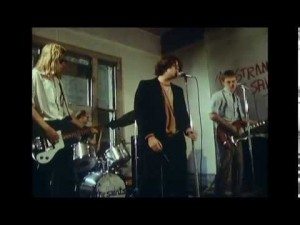 The Saints mural will be part of a new Brisbane music trail, including former George Street rock venues (Brisbane’s Curry Shop) and be developed over a decade with  venues, practice rooms, apartments, homes, galleries and, of course, musicians – with digital place markers, according to  The Brisbane Times.

It could have stories from Cloudland, which was flattened for developers.

Fans of The Go-Betweens will recognise Dr John Willsteed as the man behind Brisbane’s new music trail.

Years ago, he was John E, an artist and musician in some of Brisbane’s most inventive bands; Zero, then Xero, then the Go-Betweens and now, Halfway.

Today, Dr Willsteed is the senior lecturer in the Creative Industries faculty at the Queensland University of Technology.

The Saints’ famous  DIY single, I’m Stranded,  laboriously sent out by mail-order by singer Ed Kuepper, sells for $1881 on eBay although it was recorded for around $200 in 1976.

The single – and the site of Club 76 itself – officially makes Brisbane the birthplace of Australian punk, something the Queensland government seems happy to recognise these days, though it was very different when Joh Bjelke-Petersen was Premier.

The Go-Betweens have already been honoured in the city, by the Go Between Bridge, which links Hale Street in Milton to Montague Road in South Brisbane.

Kuepper’s parents’ garage was the band’s first rehearsal space – and his parents’ home in Oxley provided the contact address for the vinyl. As he was later to suggest on a solo release, the young Kuepper was in fact a Mail Order Bridegroom, giving birth to Australian punk in Queensland. This photograph  (below) of the young Saints in North Sydney is from Kuepper’s Twitter feed, photographed by Violet Hamilton.

The Petrie Terrace area of Brisbane is also part of the history of The Go-Betweens, who played Baroona Hall in an early $5 gig. This poster comes from the excellent Live Delay website. Baroona Hall at 15 Caxton Street, Petrie Terrace is now heritage listed. The Saint’s Brisbane mural will now add to that heritage. 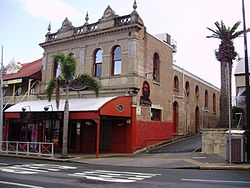 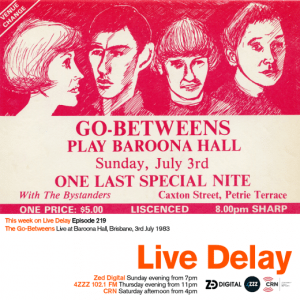 Kuepper played through Mark Moffatt’s 1960 Fender Super amp, purchased in London. A microphone placed in a concrete hallway helped the sound, according to Moffatt.

The single was recorded at Window Studios in West End, owned by Bruce Window, in  Brisbane. Only 500 copies were pressed. The State Library of Queensland now owns one of them.

The mixing desk upon which I’m Stranded was recorded,  was sent to a tip in Tasmania. It’s a sad story all too typical in Australia.

The 24-channel desk was purchased by Nick Armstrong and placed in Hobart’s Spectangle Productions in the late Seventies. He paid $4000 for it. Later, it was given free to anyone who wanted it and this piece of Australian history was driven away in a Kingswood by Hobart ABC staff Steve Jay and Graham Himmelhoch-Mutton. It was pronounced ‘rooted’ and was then gutted and sent to the local tip.  It remains dormant in Hobart. A punk rock volcano.

The Saint’s first album was produced by New Zealander Rod Coe who had 40 albums with Slim Dusty to his credit.

Kuepper was working at Astor Records as Sales Representative for Northern Queensland, which meant receiving tapes of country and western music from amateur musicians, and turning them into vinyl. Before that, he had worked in an abbatoir.

It was only when he’d left Astor that he realised that The Saints could do exactly what unknown country and western singers in Queensland were doing and take a DIY, hands-on approach.

Some copies of I’m Stranded would go to Rocking Horse and Discreet Records in Brisbane. Others would be posted to England, notably Sounds, which gave them one of the best-known reviews in music press history (below). John Ingham made it SOUNDS SINGLE OF THIS AND EVERY WEEK on October 16th, 1976 so the stamps from Brisbane had been worth every cent.

Kuepper printed his parents’ address in Oxley as The Saints’ mailing address. Cash envelopes arrived, for the single which had been mastered and pressed in Melbourne at Astor Records, probably cut by Frank Hulbert, according to Kuepper’s source Donat Tahiraj.

Anyone in Britain willing to send a 90p postal order to Eternal Productions, Oxley, 4075, Queensland Australia back in October 1976 was making a great investment. Robert Forster, writing in his autobiography Grant and I, was an early Brisbane purchaser (and Saints fan) and says he wished he’d bought multiple copies, if only for the eBay returns.

David Nichols writes – anyone who ordered a copy of I’m Stranded by mail-order in 1976 also received a request to write back, if they were interested in either The Saints – or Sixties bands.

This interest in the Sixties and Fifties was a hallmark of Seventies punk rock, all over the world. The Saints began life as Kid Galahad and the Eternals – a reference to the Elvis Presley Film, Kid Galahad, according to  author Clinton Walker. Eternal Productions of Oxley also nodded to the film.

It’s now four decades since Club 76 in Brisbane. A map of The Saints’ old stamping ground is now etched on limited-edition effects pedals.

The work of Chris Bailey (in the Church of the Latter-Day Saints) gives people who are new to the band a second-wave experience.  The clip below, from Rockarena, is a reminder of a band whose individual members sailed on, having launched their ships all those years ago at Club 76. Buy The Best of the Saints here.