England had the NME. America had Creem. Australia had Go-Set and in the Sixties and Seventies it played a crucial part in helping to create the Australian music industry.  The future Prime Minister of Australia, Bob Hawke, shared cover space with Gerry Humphries (sic – his name was actually spelled Gerry Humphrys), lead singer with The Loved Ones.  In 1972, Go-Set cost 20 cents. The pantyhose it advertised cost 99 cents. The guitar lessons (below) were free.  Today Go-Set’s market value is around AUD$50 and rising, thanks to the rise of auction websites like eBay.

“Very early on, when we were still working out of our flat, a young guy came through the door and asked what he could do, and Tony said, “I don’t know, but you could clean the house.” They then realised what a talent they had just found, in the future Countdown Talent Co-ordinator. Ian Meldrum’s Keyhole News (below) was accurate – Ian ‘Molly’ Meldrum would not only report on celebrities, he would party with them. Now, as then, Meldrum had Access All Areas. Eventually he would use that access to co-create a new Australian music industry.

The Never, Um, Ever Ending Story, Meldrum’s 2014 autobiography with Jeff Jenkins (Allen & Unwin) reveals that the young Ian was paid  $10 for his first article in Go-Set on July 20th 1966. He promptly deposited it at the ANZ bank across the road from the Go-Set office in Charnwood Crescent, St. Kilda.

He was multi-tasking on the magazine in 1967, predicting trends for 1968 with writer Helen Hopper. “Whiskers, moustaches and mutton-chop sideboards won’t last as a trend much longer,” they proclaimed.

Four Corners considered Go-Set so important that they paid a visit to the office after it had been on sale for just seven months, interviewing a pipe-puffing, 21-year-old Tony Schauble.

The former Monash zoology student was in even younger company; the fashion writer, Honey Lee, was just eighteen.  Yellow Submarine played in the background while Ian Meldrum sported a tweed jacket.

Australia in the Sixties and Seventies had a music business that consisted of a very few names and faces – all of whom knew each other – all of whom would go on to bigger things. Vince Lovegrove was one of them.

He was a Go-Set writer, but had also been in The Valentines with Bon Scott, the leader singer of AC/DC. He later went on to manage Divinyls.  (Picture of Vince Lovegrove: Courier Mail).

Ian ‘Molly’ Meldrum and singer/advice columnist Wendy Saddington can be seen at the right, in the photograph below.  The co-creator of Go-Set Phillip Frazer has written a superb interactive record of their magazine here.

The photograph which shows the late Wendy Saddington seated next to Ian Meldrum was taken by Vera Kaas-Jager in the Drummond Street, Carlton office. From far left are: founding co-publisher and occasional editor Phillip Frazer, writer and novelist Jean Bedford, editor Jon Hawkes (later a strongman for Circus Oz), David Elfick (founder of Tracks), Meldrum and Saddington. Art Director Ian MacCausland who would also become a mainstay of Australian publishing is not pictured, but thanks to ABC-TV’s GTK (short for Get To Know)  there is archival footage.

The Daily Planet
Anyone who didn’t work on Go-Set was working for its rival, Daily Planet, set up by Michael Browning, who would go on to manage AC/DC. He set it up with Michael Gudinski, who would set up Mushroom. The first issue of Daily Planet appeared on 13th August 1971. Created to settle a feud between Michael Browning and Ian Meldrum, it did not last.

David Nichols, author, former Smash Hits writer and music historian, recalls Daily Planet as ‘an artistic triumph’ in his book Dig: Australian Rock and Pop Music 1960-1985.  The magazine employed Lee Dillow, who would go on to become John Paul Young’s tour manager. Jen Jewel Brown (then Jenny Brown) who would go on to write songs with Dragon, was also on the Daily Planet roster. She would also write a classic biography of Skyhooks.

Boomeranging around all these faces and names was Ian ‘Molly’ Meldrum who was given his nickname by radio DJ Stan Rofe at 3UZ. He thought he was a band moll. And who could forget Go-Set’s Doug Panther, the self-pronounced ‘drunken reporter’?

Lily Brett would go on to become a novelist after leaving Go-Set but back in the 20th century,  her main passion was writing  about The Loved Ones.  She was hired at the age of 19 after promising to lend her pink Valiant to Tony Schauble, one of Go-Set’s two publishers.

Lily perfected the whimsical, fab, writing style of the Sixties and early Seventies – a time when Incense and Peppermints ruled.
She interviewed Grant Rule, according to Ian Meldrum’s biography. Rule would later go on to work with Meldrum on Countdown, as its producer. Lily recorded, “He likes the colour black, greyhounds, girls with skinny legs, making movies and most important – sultanas.” Lily would later write a novel based partly on her time at Go-Set with the title Lola Bensky – the fictional magazine in her story is  Rock-Out.

She reviewed the young Bon Scott and Vince Lovegrove in their band The Valentines unfavourably, if kindly. Their 1968 single I Can Hear the Raindrops brought this response: ‘I’d advise The Valentines to forget this record very quickly. There, now I’ve said it, I feel terrible!”

The creators of Go-Set, Phillip Frazer and Tony Schauble, dreamed up their magazine at the legendary music venue, The Thumping Tum at 50 Little Latrobe Street.

Today, Literature Lane is around the corner, although there is (as yet) no plaque or mural remembering the birthplace of the magazine that trained so many writers and authors.

Not only did this place give rise to Go-Set and some very impressive Paperback Writers after their journalistic careers, in its later punk incarnation, as Bernhardt’s,  it was home to Nick Cave. Today the old Thumping Tum/Bernhardt’s is  an apartment block.

Everyone went to the Tum in Melbourne. Frazer and Schauble had edited the Monash University student newspaper Lot’s Wife together and one historic night in 1965, met with Peter Raphael and photographer Colin Beard there, to dream up Go-Set, which first appeared on February 6th 1966.

With an office at 2 Charnwood Crescent, St. Kilda, they were in the heart of Melbourne’s low-rent music industry.

Once Go-Set was off and running, it sold 70,000 copies (McNair 1970) and had a readership of almost half a million Australians. They pulled off exclusive interviews with Mick Jagger and encouraged Letters page feuds with Ian Meldrum.  It was all over by 1974, but while it lasted, Go Set was a phenomenon. It saw young Australians through the Vietnam war,  women’s liberation, gay and lesbian rights, the Pill and Pot. And Sherbet’s takeover of Melbourne.

The Archive
For an indispensable archive of GoSet covers, visit Pop Archives which has many of Colin Beard’s Sixties portrait photographs on display. Armed with a Pentax (no flash, at the beginning) he went backstage to photograph The Rolling Stones and made his name.  Miles Ago is also an excellent Go-Set resource. The National Film and Sound Archive of Australia and the State Library of Victoria also hold good collections of the highly collectable magazine. Researcher David M. Kent has an unmissable blog.

Other advice columnists included  blues singer Wendy Saddington, from 1969. The job seemed mostly to go to women and by the time Suzi Quatro had her first single out in Australia, staffer Jandy (below) was tapping out replies to agonised questions.

Almost anyone who ended up becoming anyone at all in the Australian media, music and entertainment industry, ended up in the Go-Set offices at some point – or being interviewed by the staff.

Apart from the aforementioned names, the magazine attracted David Elfick, founder of Tracks and producer of Rabbit Proof Fence.  Ed Nimmervoll became a powerful voice in the Australian music industry and went on to found Juke.

As Phillip Frazer explains in Iain McIntyre’s  book on Australian psychedelia, Tomorrow is Today, everybody was under the age of 23 and everybody liked surfing and slot-cars as much as they liked music, so ‘lifestyle’ found its way into the Go-Set pages. So did horoscopes. Decades later, several staff found themselves living around Byron Bay, where a recent story of them surfaced in local media, along with this wonderful photograph of some original Go-Setters.

Denise Drysdale (below)  who is still a successful Australian television face, was part of a Go-Set go-go dancing team. She would take her place with the Go-Set Mafia later on, and join Ian Meldrum in selling Countdown to Australia, below. 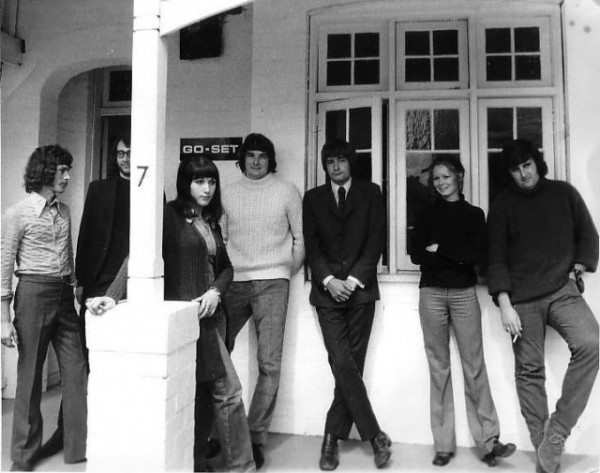 The Horoscope
Your Stars as I See Them, by Evelyn King, ran until the end of 1966. Later, advertising sales manager Terry Cleary wrote the horoscope, or was it was known, The Go-Set-Oscope. His father was Jim Cleary, who played football for South Melbourne and according to Ed Nimmervoll, he used to make the astrology up. Some time later in the Age of Aquarius, Hair would appear at The Palace Theatre in Melbourne with its own in-house astrologer.

The Name
Writing for Crikey in 2016, Phillip Frazer confirmed, “I put go-go and jet-set together to get Go-Set.”  Part of the success of the magazine was down to the fact that Frazer and his colleagues could speak the language.

The newspapers of the time, and magazines like The Australian Women’s Weekly, did their best – but these were teenagers and early twentysomethings speaking to their peers.

The fashion was for ‘the cool trendy blokes’ back in 1968. Prue Acton, who would later become a designer, also helped with the GoSet style section – and kept her signature for her clothing label. One striking thing about the Go-Set faces who remained successful in the Eighties, Nineties and Noughties is their understanding of trends, image and changing fashion. Not only Prue Acton, but Angry Anderson, formerly with Buster Brown (with hair) and latterly with Rose Tattoo, have an instinct for the zeitgeist. 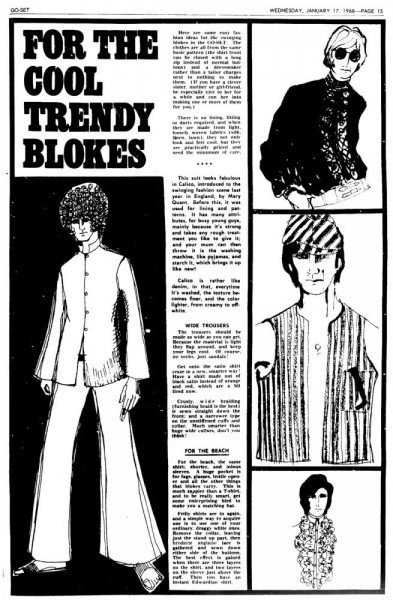 By the time ‘the teen and twenties newspaper’ had moved on from the shock of Normie Rowe’s Vietnam call-up, and Billy Thorpe and Gerry Humphries were making way for AC/DC – it was almost over. 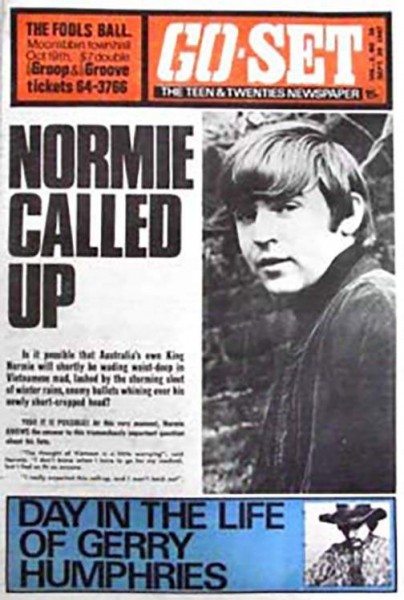 As The Beatles were farewelling the Sixties and also each other, Go-Set was not far behind.   RAM magazine would come along by the Eighties, together with Rolling Stone and Juke.  Free street press would appear – On the Street, Drum Media, Beat.

Within a short space of years, The Thumping Tum, where the whole magazine had been dreamed up in such a classically Sixties way – would be turned into thumping rubble by Melbourne developers, after briefly being a punk venue favoured by Clinton Walker, Bruce Milne, Nick Cave and Rowland S. Howard.

While it lasted, though, Go-Set was the best training ground Australia has ever seen for  what would become its world-beating music, media, fashion and entertainment industry.  And all done with a flash-free Pentax and Ian Meldrum’s clattering typewriter.

There was a time when everyone wanted to be in the Go-Set Club (below) but today there is Twitter, Pinterest and Instagram instead. That might just be Australia’s loss. Until then, you can find GoSet for sale on eBay.

Thanks to Jen Jewel-Brown and Phillip Frazer. All video footage can be seen at YouTube.