The Pop Into Randwick exhibition in Sydney has put the career of Little Pattie back in the spotlight in Australia.

Little Pattie – Patricia Amphlett – has inspired generations of loyal fans in Australia and collector and friend Robyn Fagan has kindly lent photographs of her fan scrapbook to AMMP.

The Amphlett Beat Goes On

On 27 August 2009,  Patricia, known professionally as Little Pattie, was inducted into the Australian Recording Industry Association (ARIA) Hall of Fame alongside Kev Carmody, The Dingoes, Mental As Anything and John Paul Young by Chrissy Amphlett, her cousin.

The family beat goes on and the late, great Chrissy Amphlett  has lent her name and face to tributes in Geelong, where she grew up – and in Melbourne. In the ACT another  Amphlett Lane twist – Amphlett Street in the suburb of Moncrieff – also keeps the Amphlett beat going.

Patricia Amphlett Fan Collections
Historians and curators often turn to fans for their collections. Someone who has been a lifelong fan, particularly of Little Pattie, is Robyn Fagan.  Robyn runs Patricia’s Facebook page. She has some rare memorabilia too (below) which she passed onto AMMP including a wonderful photo-booth moment in time.

Beyond the Little Pattie Scrapbook

How did Robyn’s fandom and friendship begin?

Robyn – ‘I was 13 years old at the end of 1964 when Little Pattie’s record He’s My Blonde Headed Stompie Wompie Real Gone Surfer Boy/Stompin’ at Maroubra began getting lots of airplay on Sydney radio stations.  It became the first record that I ever bought and I played both sides constantly.

One day I heard the DJ say that it was by ’15 year old Sydney schoolgirl Little Pattie and I was gobsmacked that, not only someone from Sydney but someone who was only a little older  than me, could be singing on the radio.

It immediately became my mission to find out all about her and I remember raiding all the old newspapers and magazines in my parent’s garage to see what I could find.  And there began the first of many scrapbooks of photos and stories that I have collected about Pattie over the last 50 years.” 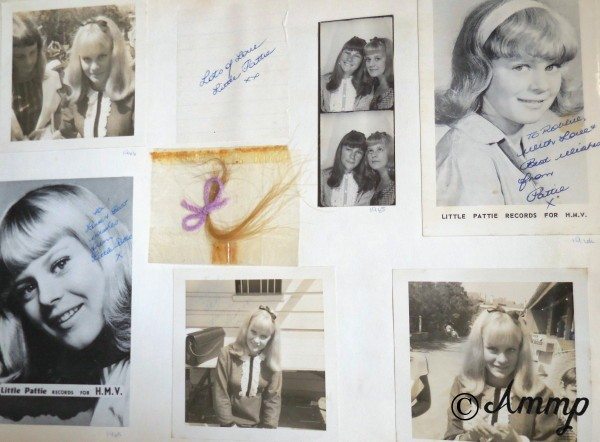 In April 1964 I saw Pattie in person for the first time at Sydney Stadium and then at several store appearances and fetes.  I started sending her fan mail and sometimes included newspaper clippings about the Beatles and Judy Garland because I knew they were her favourite singers.

Later that year she wrote back thanking me, gave me her address and said to visit any time I was nearby.  Early in 1965 I plucked up enough courage to make the hour and a half trip by two buses and a train to make the visit, not even expecting her to be home.  She greeted me with a big hug when I told her who I was.  That was the beginning of many social outings together – and meeting up at her gigs – and we have remained close friends to this day.

I invited Pattie to my 16th birthday party. My friends didn’t believe me when I told them she was coming so they were surprised when she walked through my door and even more surprised at how friendly and down-to-earth she was for someone so well-known.

I took over her fan club in 1966 which I ran until 1973.  There were over 300 members from all over Australia, many of whom wrote regular letters asking questions about Pattie, wanting her autograph and so on.  The members were sent a membership card when they joined and I sent out a newsletter every month or two with all the latest news, upcoming shows and photographs.

We held picnics every few months which Pattie attended. One of the fan club newsletters is in the Powerhouse Museum archives and has been on public display in two of their exhibitions as an example of a typical fan club newsletter of the time. 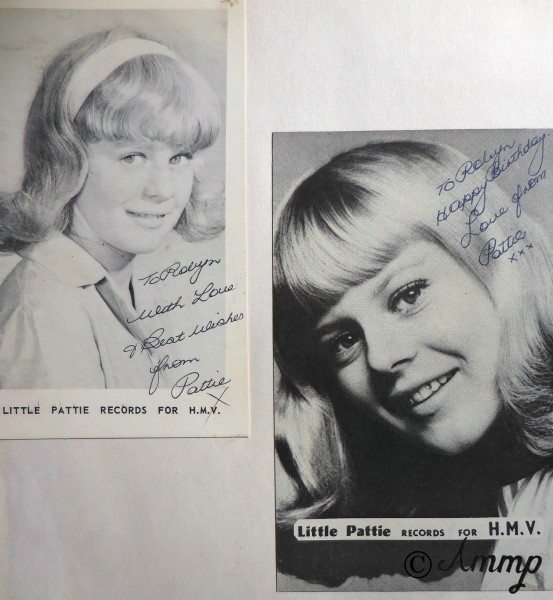 From Scrapbooks to Social Media

A few years ago I decided to start a fan page for Pattie on Facebook and regularly post photographs, news and gigs. There are currently 3,580 followers and I get a lot of messages from fans and old friends wanting to get in touch with her and media wanting to interview her, as it’s the only way most people know of getting in touch with her.  It kind of feels like the old days of running the fan club all over again, but in a different format to back when I had to handwrite or type replies and post everything out by mail. It’s so much easier these days with the joys of modern technology.

The Many Moods of Little Pattie
My most precious single is Pattie’s first release as it was the first record I ever bought as a teenager and led to what has become a lifelong friendship.  My favourite album is her first, ‘The Many Moods of Little Pattie’, probably for the same reasons and also because I still remember how cool it was to be one of the few kids in my crowd to own this and listen to Pattie singing many different types of music.  This album is very rare and hardly ever seen for sale.

The most rare singles I have are Pattie’s  three Japanese releases from 1966/67, two of which she sings in Japanese and one a re-release of one of her Aussie hits.  These were recorded in Japan when she and Col Joye visited after their tour of Vietnam.  I also have the extremely rare red acetate prototype versions of these singles that Pattie gave me.  I have every single, EP, LP & CD that Pattie has ever released.