The Thumping Tum and Bernhart’s

Walking Melbourne With a Music Map

From Amphlett Lane or AC/DC Lane it’s a short walk to Literature Lane, near a famous old club where Go-Set was created and Nick Cave played.

There was once a little Melbourne club which was so groovy it got its own song – and dance. The classic Sixties Australian garage rock single you can hear above, dedicated to the Thumping Tum  was recently valued at nearly $1000.

By 1978 The Thumping Tum had become the Melbourne punk venue Bernhart’s and in 1978 not only The Boys Next Door but also Young Charlatans played gigs there, with Nick Cave and Rowland S. Howard in the room.

This is part of the story. Nothing remains of the historic music venue today. Apartments have been built in its place. 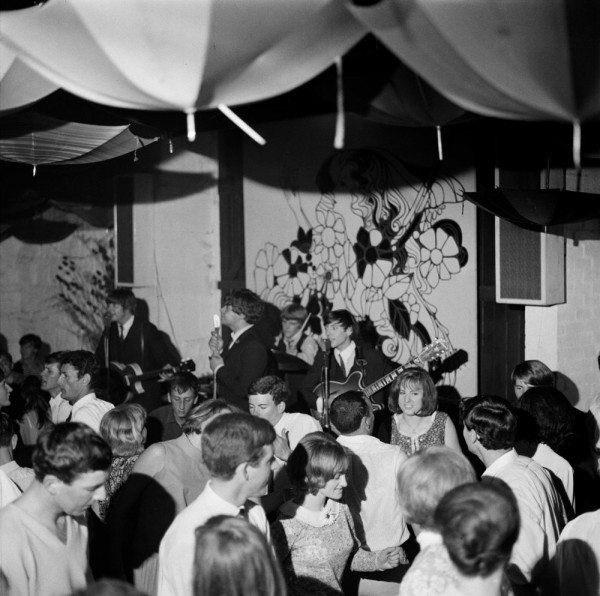 The groovy Thumping Tum of inner-city Melbourne was the only place to be in the Sixties and Seventies with gigs under the umbrellas, by The Masters’ Apprentices,  Max Merritt and the Meteors, Billy Thorpe and the Aztecs.

Wander down Little Latrobe Street in Melbourne today and all you will see is apartments and cranes, but in the Sixties and Seventies, The Thumping Tum (which inspired that $1000 worth of great Australian single, in the YouTube clip above) had queues stretching to Swanston Street.

This is a modern homage poster (below) to The Thumping Tum, below (Pinterest). According to those who were there in the Sixties, it was a place for magic acts, toasted sandwiches, sleeping bags and incense – as well as unforgettable Australian music. 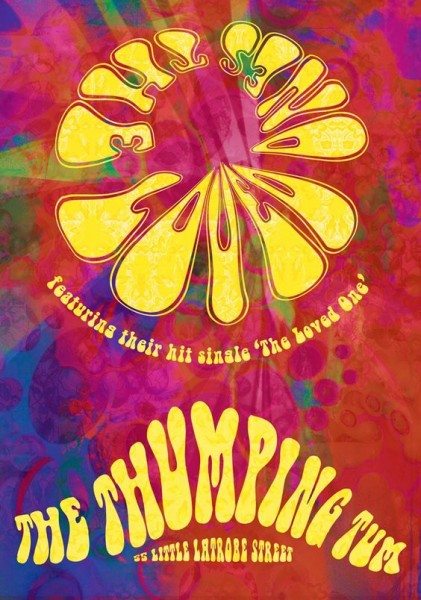 The Thumping Tum was  decorated with inverted umbrellas hanging from the ceiling, a concept dreamed up by Myer window display staff who ran the place.  This is a rare photograph (below) of the Thumping Tum ceiling, from Go-Set.

This Melbourne gig guide below, shows where it was all happening with gigs by Max Merritt and the Meteors (photographed at The Thumping Tum, below). The David Bentley Trio played there too. 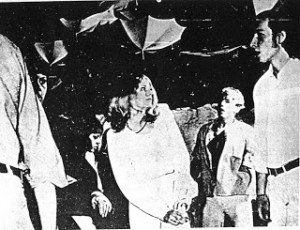 The Thumping Tum was the club where the backdrop kept changing, in pace with the music.  It would eventually become an inner-city punk space for what writer Clinton Walker would eventually describe as The Inner City Sound.

Back in 1971, though,  when Carson were playing at The Thumping Tum, the wall mural had changed from late Sixties flower power and psychedelia to a rising sun. That was one its many incarnations, pictured below.

Broderick Smith, one of the best-known names from that time, has archived this photograph by Harley Parker of Carson at the Tum on his website.

Note the barefoot drummer. The Thumping Tum evolved from being the kind of ‘discotheque’ where bands like The Purple Hearts would spend the night – to a blues venue, home to Wendy Saddington (below) and Chain, Billy Thorpe and the Aztecs and more local luminaries. 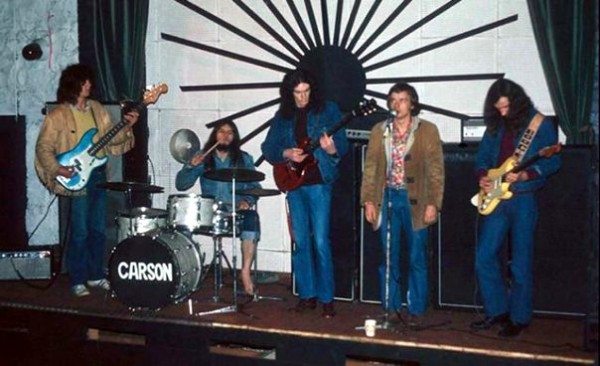 Michael Browning became famous for managing AC/DC but his recent book, Dog Eat Dog, is also a brilliant recollection of what it was like to run clubs in Sixties and Seventies Melbourne.

Myer window-display staffers Ken Moat and Ron Eden dreamed up The Thumping Tum in 1966 and found an old bluestone factory at 50 Little La Trobe Street, which had been a pub before. They also dreamed up a slogan. ‘Go-go to be seen at this swinging frugging scene.’ It was ten shillings to get in.

The  umbrellas had been bought at a railway lost property auction. There were Tiffany lampshades. It was Melbourne bohemia. Writing in Dog Eat Dog, Browning recalls, ‘The clientele was a mix of very cool and edgy art students, serious music lovers, pill heads and hipsters.’

Before Chrissy Amphlett became a rock star she was a hippie, playing songs like St. James Infirmary on her autoharp. This photograph, and her memories of The Thumping Tum, are from her autobiography, Pleasure and Pain (Hodder).

Chrissy moved from Geelong to Melbourne with a friend, Alison Baker, and they became close in the big city. And Alison had connections.

Chrissy Amphlett: “Her cousin, David Flint, owned the Thumping Tum which with its red velvet curtains and antique furniture, vied with Bertie’s and Sebastian’s to be the best Melbourne nightclub of the time.” 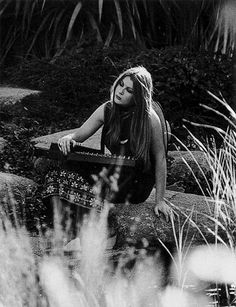 David Pepperell is one of the unsung heroes of Australian music. Not only did he sing on that garage-band classic The Thump  in his band, The Union (creating the sound with Trevor Lunn), he also found a choreographer named Antonio Rodriguez to organise the accompanying dance.  A boxer named Leo Young was on the  Tum door, working as a bouncer.

It was a time when you could turn up in a purple velvet jacket to see a band like Baron Burke and the Undertakers. Some crawled out of their boarding school windows and hitch rides to go and see gigs at 50 Little Latrobe St. In  1965 Billy Thorpe and the Aztecs filmed a Coca Cola advertisement there.

Pepperell remembers, “To me, the Thumpin’ Tum was the premier venue in Melbourne’s 1960’s discotheque scene. Although it had live bands and was not, strictly speaking, a discotheque, records were played over a sound system in the band breaks  and it was copied from venues so popular in France in the mid 60’s. The Tum opened in 1965. First group on Saturday night was The Groop, of course, Melbourne’s coolest band.

Across town, Michael Browning was running Bertie’s and Sebastian’s, waiting for Angus Young and Bon Scott to arrive –  but from 1965-1970 David Flint was running the show at The Thumping Tum and tending to inner-city Bohemia.  As he told Peter Barrett at The Sydney Morning Herald, ‘This place was going to be different. Not only was it for young people but it wasn’t in a town hall, it wasn’t a jazz club, it wasn’t a pop music club, it was a club to dance to music.’

Ian Rilen was also in the Tum crowd watching (and being influenced by) Yuk Harrison playing bass with Max Merritt and the Meteors, according to author and music historian Clinton Walker. This photograph of a Thumping Tum staff member is from the definitive book about Australia in the psychedelic era, 1966-1970 called Tomorrow is Today, edited by Iain McIntyre. Wendy Saddington, who sang at the Tum and also wrote the problem page for Go-Set, was a fixture at the club.

Lobby Loyde, speaking to Patrick Donovan at The Age in 2006, remembered “When you came on at 2.00am at The Thumping Tum, the crowd was full of bands, roadies, journos, guys from the business, the fans. You’d never make any money but it was a hell of a night of music.” Loyde would go on to produce albums for The Sunnyboys, X and Painters and Dockers after his own career with Coloured Balls.

What Makes the Town Thump?

This advertisement from the February 2nd 1966 edition of Go-Set shows the iconic umbrellas from The Thumping Tum (which was by then being called the Thumpin’ Tum, dropping the g). The question posed was ‘What makes the town thump?’ The answer was ‘the uninhibited.’ You can see the TUM sign on the left of the photograph, from Harley Parker’s definitive Miles Ago website.

The Thumping Tum eventually morphed into a punk venue. The bluestone building at 50-52 Little Latrobe Street reverberated to the sound of The Blank Generation.  Bands like News dragged their guitars up Little Latrobe Street. A benefit gig for the fanzine Pulp was held here. Rowland S. Howard illustrated the Pulp masthead.

For more on Bernhardt’s/Bernhart’s please see these excellent websites  and don’t miss Punk Journey or Clinton Walker’s record of Pulp (which he set up with Melbourne music historian Bruce Milne)  and fanzines in Australia.

The photograph of The Boys Next Door in 1978 is by Michael Lawrence from the National Portrait Gallery of Australia. Pinterest and social media are also good sources for punk era publications. 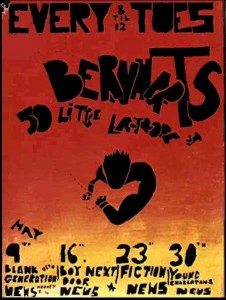 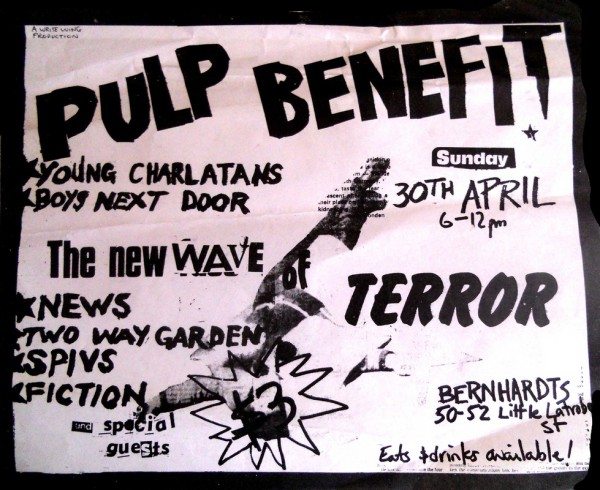 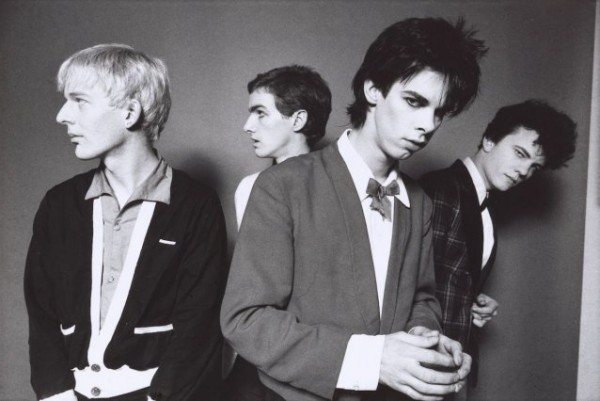 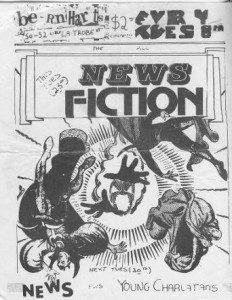 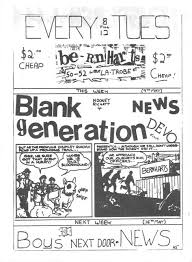 Jim Keays (The Masters’ Apprentices) became a painter in the second half of his life and once said he would like to paint the old haunts of the band. “There was the Thumping Tum in Melbourne where I wouldn’t mind revisiting with my paint brush,” he said.

The umbrellas are gone, but the melody – and the influence of the club – lingers on. 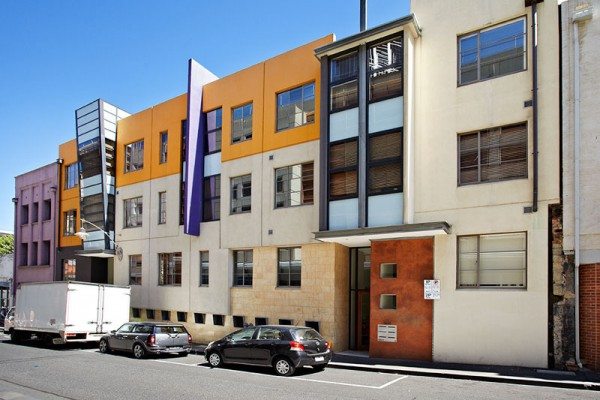